Warning: Parameter 2 to WPE\Site_Preview::the_posts() expected to be a reference, value given in /home/costumec/public_html/joebedford.co.uk/wp-includes/class-wp-hook.php on line 288
 Joe Bedford – Page 6 – Writer (1986 -)
Skip to content 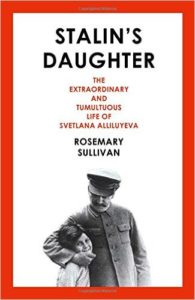 Who? Rosemary Sullivan, a mild-mannered Canadian historian from the now-times.

What? A biography of Stalin’s daughter Svetlana Alliluyeva who, as you can imagine, led a mad one.

When? It’s a newbie.

How? In one long straight line, though somehow lacking a sense of thoroughness.

Why? The question rather is, should I share my thoughts on this? For shame, I only read the parts useful for my research, and skipped the rest. It’s true. Is this a reflection of the book’s flat and often glib prose? Very possibly. Is it a reflection of my laziness? Quite probably. Do I have any right to share my incomplete, uninformed thoughts on what is, at its core, a well-researched if not tediously-presented historical biography? Almost certainly not. Though Sullivan’s clean, well-rendered style lacks personality, her intimacy with the subject and ability to juggle the varying personas that occupied Svetlana Alliluyeva are done just fine. They are done just fine, and only someone who has persevered with the text in all its long-ass glory can animate themselves on the subject any further.

‘The crowd is typically torn-shirted and jack-booted, ritualistically colliding with each other, conkering smaller Mohawks out of the clearing. All heads, all elbows – the entity revolves around itself, crashes into itself, destroys and rebuilds itself like an asteroid belt. Bored lumps of rock pumped full of energy and desperate for contact, impact of any kind.’

Published this week by the good folks at Disclaimer magazine.

Who? Brian Moynahan, English journalist, historian and, at a guess, Catholic.

What? A mammoth account of the first few years of the Siege of Leningrad, with a particular focus on the composition and performance of Shostakovich’s Symphony no. 7.

When? 2013, though examining the years immediately following the author’s birth. (A coincidence as his surname suggests).

How? Endless anecdotes following recurring characters through an increasingly-tortured city under siege.

Why? This is popular history ala Beevor and Figes, with the same compassionate eye and the same devil-is-in-the-details approach to delivering a vastly-complicated social narrative. While the military sections are thankfully oversimplified and in places glossed, Moynahan’s panoramic presentation of the city’s wartime musical life is fascinating. Shostakovich’s Seventh, which (barring its Invasion theme) is a fairly-forgettable piece of music, is recast in the light of its epic importance to the Allied forces and to the Soviet propaganda machine. It’s only a shame that both the symphony and the book are simply too, too long.

Who? Isaac Babel, Russian journalist and super-Jew who was later tortured and murdered by Stalin’s goons.

What? Thirty-five short-short stories about the exploits of the Soviet First Cavalry Army in their failed 1920s fuckover of Poland.

When? 1926, after the Bolshevik Revolution and brutal Red Terror, before Stalin’s Purges.

How? Concise, direct vignettes with enough casual violence to make Irvine Welsh say: ‘Oo – that is gory. And true.’

Why? I first read Babel’s short story ‘Salt’ in The Penguin Book of Russian Short Stories and thought ‘yawn‘. Compared with the daring of Bulgakov, the colloquial charm of Zoshchenko and (closest to my heart) the sheer linguistic ambition of Platonov, Babel’s journalistic, war’s-hell-laden plainspeak bored me to the tits. But in many ways, Babel surpasses his contemporaries. His sense of the realities of war is laid out in mostly terse, certainly distanced images which still resound with more humanity (however shellshocked) than Bulgakov’s. His characterisation is equally resonant; the various vaguely-recognisable archetypes that recur throughout the collection, and the conflicts that define them, are as authentic as any voice in Zoshchenko’s stories. Still, the major surprise in Babel’s prose comes from the bafflingly-poetic idiosyncrasies he chooses to include even in spite of his otherwise concrete style. These inflections of personality approach what Platonov envisaged when loading his imagery with multiple mirrors and perspectives. These are chinks of light in a chiaroscuro painting otherwise overloaded with shadow.

What? An autobiography in which the author meets every famous Russian musician of the time, has a trip to America and tries to avoid being busted for not loving life in the Soviet Union.

How? Anecdote-by-anecdote, with reconstructed dialogue that makes everyone sound like characters in a Tony award-winning one-man Broadway show.

Why? Although Dubinsky’s complaints about life in the Soviet Union rarely wander into political rhetoric, his portrayal of life as a musician employed by a culturally-invasive bureaucratic state is compelling, and his colouring of contemporaries like Shostakovich and Oistrakh adds charm. But, there’s a snag: the prose is cheap and predictable, and the anecdotal gloss makes every retelling seem somewhere short of authentic. If it is not ghostwritten, and if Dubinsky had not begrudged his KGB handlers, he might have made a rather successful hack for a state newspaper.

Who? Faubion Bowers, a flamboyant culture critic from Oklahoma, later to inexplicably rescue the Japanese art of kabuki from extinction.

What? A biography of the fin de siècle Russian composer Alexander Scriabin: a baby-faced solipsist and syn-aesthetic with a knackered right hand.

When? 1960s, and smacking of vaguely pre-acceptable speech.

How? Via sprawling examinations of the composer’s holidays and extensive quotations from boring domestic letters.

Why? Bowers’ fascination with the quasi-mystic Scriabin stays on the proper side of worship; he appreciates the music without indulging the pie-in-the-sky program notes that obsess most devotees. Instead, Scriabin’s poetry is presented plainly alongside the context of his development as a composer, and thankfully the two can be firmly separated. Bowers at once reinforces the untimely psychological force of the music, whilst dimming the mysticism that still surrounds the composer’s legacy. It is unfortunate that this legacy is not explored in the biography, as Scriabin, despite being examined in minute detail for 600 stodgy pages, dies from a lip-sore two pages before the end.

After several months wresting our content from the hands of the Mossad (or more likely simply untangling the web of bullshit spun by some 13 year-old cyberpunk in LA), we are finally back in business.

Use, peruse, but try not to abuse. Follow the links for short stories, book reviews and outsider shout-outs, and if your cousin is a bigwig at Penguin, by all means get in touch.