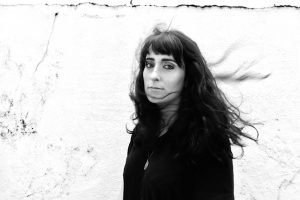 As part of my interview series Writers on Research, I spoke to author Alice Ash on the research process behind her debut collection Paradise Block (Serpent’s Tail, 2021).

I was wondering firstly about where your stories originate. Some writers I’ve spoken with begin with a character or a narrative idea, some act of imagination, whereas others often start from a news story or something they’ve seen in the real world. I wanted to know if the stories in Paradise Block generally came from within or whether they were inspired from without?

I think most of the stories in Paradise Block came from a character – there was usually a spark that started with a voice I could hear, or a strange way of speaking, a few words that would give me a clue about what the character was like or, sometimes what they weren’t like. The difference between presentation and truth is an important element of character to me, so this was something I would often think about when trying to sketch out a story.

I’ve always meant to use newspapers for ideas, but I never got around to it when I was writing Paradise Block. Several stories were inspired by my real-life experiences, though – usually, it was something small: an observation about behaviour or a habit. A friend used to babysit a boy whose absent father was a train driver; the boy was aggressively proud of his father, obsessed with trains and driving them, but also weirdly fixated with train crashes. That detail struck me as having a lot of weight behind it, and, with some alterations, it bore one of the main characters in Paradise Block: plane-obsessed and fatherless Benny. So sometimes it’s just a moment or observation like that, a detail that moves the character a little bit in a certain direction. Other times it’s a voice that comes when I start writing and lends itself to scenes. Occasionally I have some weird image that I know fits within the story; I want to write quickly so that I can get to that image and write about it. With ‘Timespeak’, a story about a man who is harassed by a telesales agent trying to sell him his own coffin, I had a strong image of an elderly gent in an armchair – he was deaf, staring at a telephone that he could no longer hear ringing. This image made me think that the man wanted the telesales agent to ring, and that detail unlocked the story.

I think that strategy of an image, particularly an uncomfortable or surreal image, unlocking the narrative is something that helps bring Paradise Block into the sphere of hyperrealist literature – a genre that exploits sensory images in order to explore the line between reality and the fantastic, as I think Paradise Block does. Were there any works of literature, art, film, music that you purposefully drew from when trying to explore this line? Or perhaps that you felt you wanted to write against?

I think that writing about mental illness and detachment naturally fragments into fantasy, and hyperrealism lends itself to mirroring fixation and obsession, too. With my recurring characters, I wanted to create an atmosphere of uncertainty, of doubt and confusion. I loved the idea that I could depict a character in a certain way in one story and then completely contradict that in another. I was trying to do show the subjectivity of the stories, how truth in character is slippery and ‘reality’ can distort from one moment to the next.

The biggest influences on my process were Shirley Jackson and Camilla Grudova’s The Doll’s Alphabet. Jackson’s magic is so minutely aside from reality, which is what really thrills me – I find it far more frightening to have the darkness in your own world exposed than to be shown a far-off reality, so I always tried to keep my weirdness close to home and almost feasible to everyday life. It’s interesting to me that scary things can happen when you’re on your own, in your bedroom, watching TV or waiting for the telephone to ring. Jackson makes neighbours and kindly old ladies strange; she shows you a ‘normal’ scene and then adds teeth to it – this is what I love. And Grudova’s collection was really pivotal to my idea of what a short story collection could be – it made me begin to think of the stories as having their own rules and logic, not just themes that link them. The Doll’s Alphabet made me see the collection as its own unique universe, full of objects and codes that belonged specifically to Clutter and to Paradise Block. And I think that Grudova’s style gave me more audacity to sprawl out and get a bit weirder as a writer too, which is where my favourite of the stories came from.

I’m glad you brought up Clutter, as I think as a motif that setting perfectly encapsulates that sense of consistent internal logic which helps lend the town its eeriness. Clutter is obviously an imagined place, and the collection is I think quite open in exploiting the freedoms of the setting’s imaginary nature. That said, I’m curious as to whether you had aspects of a real physical space in mind when you were modelling it, or perhaps a conflagration of spaces, as I infer from the collection? Was there any ‘field-work’ involved in researching and constructing the descriptive environment?

I didn’t want to locate my tower block in a real place because I didn’t want the collection to feel too much like it was solely social commentary. I felt like writing about poverty in a real landscape would make every story and theme reflect through that lens, and I didn’t want that. I’m working on a novel at the moment, and it’s also set in an imagined place, this time a lakeside village called Dark Poole. I think maybe I feel trapped by real places, maybe I don’t want the reader to bring their own suitcase of experiences to my universes – I agree, I do very much enjoy the freedoms of an imaginary landscape that I own in my head. In Paradise Block, I wanted my world to have its own rules, for the people to be shaped by the consequences of this world – the setting itself is a character that the reader has to understand. The interior narratives of the people in the book are very distorted, and I felt like I wanted to mirror this with a setting that was just as unreliable.

But still, when my publicist sent the book out, she described Clutter as a strangeland version of Brighton, and I was like, huh, yeah, it kinda is. There’s the beach, the shopping centre, the launderette up the road; The Brass Cross is based on a pub I used to work in. So Brighton is definitely in there. And yes! I did go ‘on location’ to Debenhams where I wrote ‘Complaint’, which is set in a department store. I find department stores incredibly creepy and watchful, and I enjoyed that a lot – all the ominous silence, the gliding elevators, the sense of never-ending false worlds of cutlery and glassware, BBQs set up with miniature plastic sausages and cardboard cut-outs of grinning Dads. Department stores are so strange to me, and I think they encapsulate what I was hoping to achieve with my setting in general. I wanted Clutter to feel like it was hanging on a cliff edge, like everything surrounding it may or may not exist, and like the whole town might twist and disappear into the sea at any moment.

And as for Plum Regis, the slightly more affluent town in Paradise Block, I was thinking about Chekov’s Three Sisters when I was imagining this place. Plum Regis is the Moscow to my Clutter, but, of course, the imagined version of the town is more potent than the real one. In my head, Plum Regis is more or less the same as Clutter, maybe with a slightly nicer department store and a pub with a better crisp selection. I was thinking about how poor people are encouraged to fight over crumbs, living within fantasies about how much others have, while the very wealthy eat whopping big slices of cake at the top.

I get that. I think in terms of social commentary Paradise Block is more of a question than an answer, and certainly not prescriptive in terms of how we respond to real-life environments that we might read as analogous to Clutter. Though I do think there’s something there in that link between Clutter as a society and the difficult, even ‘cluttered’ internal lives of your characters. It still feels, amongst the hyperrealism, like a collection about the real world, real people. In that sense, I wondered whether in compiling Paradise Block you had in mind some specific aspect of the real world that you felt these stories would help investigate.

When I was writing Paradise Block, I was exploring a part of myself that felt ultimately quite lonely and isolated, trying to decide what would happen to that bit of me. I wanted to express what it felt like to be poor and to consider lives that are often ignored, too. My dad worked for the ambulance service for years, and he often used to talk about how it felt to burst in on people in their private rooms, which were sometimes very messy, neglected and lonely. I wanted, I think, to explore these private rooms as though they were hidden mental spaces, and to think about what keeps people apart when they are so in need of solidarity. This was quite an introspective process for me and, because it took me so long to write the book, my attitude evolved as I got older. Later in the process, I realised that I also wanted to express solidarity between characters and not just the way lives are pushed apart.

Recently, I read a George Saunders essay on how the act of writing helps us to empathise with the world around us. Saunders starts writing Bob – an unreasonable ‘asshole’ who snaps at a barista. The writing process makes Saunders delve deeper, however – he asks himself why Bob snapped. Maybe Bob’s wife had recently died, maybe Bob was a widower, and the barista reminded him of his wife: ‘When I stop writing and come back to myself, I feel more opinionated, and petty.’ This made me think a lot about my characters in Paradise Block, many of whom I wrote based on my own feelings of loneliness, or on bad experiences, people I thought of as unkind and who I wanted to be ‘assholes.’ But as I wrote, the characters rounded and lost their pure asshole-status, they became people who had suffered and who suffered still, and that’s how I hope my characters come across. So I learnt a lot about the greyness of ‘good’ and ‘bad’, and how the most interesting characters are something in between. I wanted to write about people divided and alone, but as I carried on writing, the hope sprung naturally through the cracks in the pavement – writing the book was a weird kind of therapy for me, I guess. There is more hope and unity in Paradise Block than I imagined there would be when I first peered through the dirty windows – now, the tenants are lightly touching each other’s lives.

Alice Ash is the author of the short story collection Paradise Block (Serpent’s Tail, 2021). She was longlisted for the Galley Beggar Short Story Prize in 2019, and other writing has been featured in Granta, Refinery29, Extra Teeth, Hotel, 3:AM Magazine, the TLS and Mslexia. She lives in Brighton. Instagram & Twitter – @aliceash_

Writers on Research is made possible with National Lottery funding via Arts Council England.