Many thanks to the Mechanics’ Institute Review, and to Alison Hitchcock for her editorial support, for publishing my short story ‘Le Petit Robert’, up today on MIR.

What? A classic Central European revenge novel, hopping round the continent looking for some bloke what did him wrong. Fleming liked it anyway.

When? Written in the 1920s, long-neglected, resurrected with snazzy cover just last year.

How? A slow and at times trying meander punctuated by moments of cold tension.

Why? It is hard to know whether I found Perutz’s prose dry because it is written in such a concise, direct manner, or because I read the bulk of it whilst fighting a horrific, vomitous hangover during a plane ride back from Portugal. I did not vomit, and the Perutz was there to distract, but a better remedy could have been found. Perutz’s patter, though revenge-driven and full of historical detailing, was not gripping enough to justify the tension he attempted to create. It was only by sheer willpower and the comforting proximity of the Boeing loo-box that I was able to hold my stomach in at all; it is difficult to attribute any gratitude to Mr. Perutz. A harsh criticism, but fair.

Little Apple is available as a Pushkin Vertigo paperback. 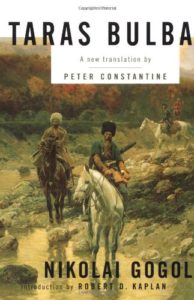 Who? Nikolai Gogol, old school Russky, author of that one where the bloke’s nose runs off.

What? A mini-epic about mental bloodthirsty Cossacks setting out on a random massacre mission in the Ukraine. Blurb features a quote from Ernest Hemingway: ‘One of the ten best books of all time,’ though I can’t find that anywhere.

When? First published in Russia in 1835, though even those two details fail to clarify the books rampant, casual anti-Semitism.

How? Without Gogol’s characteristic good humour but with his trademark elegant descriptive power – the best aspect of the novel.

Why? Though the racial stereotyping Gogol employs, perhaps simply to capture the tone of the time (it is set, even for him, in the past), only occupies parts of Taras Bulba, it would easily be enough to put off plenty of modern readers. His descriptions of Ukrainian Jews are by far the most disturbing, but Polish and Turkish people also take a bit of a drubbing, and even the thrust of the book, the insane masculinity of the Cossacks, relies itself on stereotyping. The broad strokes by which the Cossacks are characterised (violent, abusive, foolhardy/courageous, drunk, proud, impulsive, heroic, barbarous) cement our modern view of this ethnography; to what extent Cossack life was an endless cycle of fighting, dancing, drinking and wife-beating I do not know. Gogol’s treatment of the Cossacks, as well as of the Jews, Poles and Turks, is uncompromising and stark in its depictive power. Their savagery, as drummed in by Gogol, maintains charisma, and their social problems are given due respect. Regardless, there’s a lot of chopping off heads, and a fair few bloody noses. No wonder Hemingway liked it so much.

Taras Bulba is available as a Modern Library Classics paperback in translation by Peter Constantine and with an introduction by Robert D. Kaplan.

Pleased to be included in this year’s Rattle Tales anthology, with a short-short story about our very own Caroline Lucas.

What? A memoir of bleak optimism, or optimistic bleakness; an account of the author’s husband’s mental and physical destruction by the State, largely because he wrote a poem describing Stalin as having cockroachy whiskers.

When? As indicated on the cover by BBC Radio 4: ‘The publishing event of 1971.’ Finger on the pulse.

How? Time-hopping through anecdotes of the Terror in a swirl of disoriented memory and sincere social observation.

Why? It took a while to get hold of Hope Against Hope; the copy that arrived on my desk was yellowed, well-thumbed, unread in a while. The reason for this is simple: the subject matter is not in vogue, and the book is not well-appreciated. The fact is that Nadezhda Mandelstam’s memoir stands amongst the most personable, riveting, eye-opening letters on the twentieth century, and is absolutely the greatest account of life under Stalinism I have yet encountered. The account of her husband’s persecution shows the extent to which the threat of art (even aside from its counterrevolutionary manifestations) was taken seriously by the State, and does so in a way that would evoke respect in every artist in the modern world. Nadezhda Mandelstam’s writing itself commands equal respect; it brings to life the cultural milieu of 1920s/1930s Russia whilst maintaining complete freedom of personality and an unerring loyalty to her late husband. Hope Against Hope should be, and continues to be, considered as primary source for historical accounts of the life of the artist against tyranny, and is absolutely indispensable for anyone wishing to understand the extent to which politically-motivated groups have been willing to go to suppress human creativity.

Hope Against Hope is available as a Collins hardback in translation by Max Hayward, with an introduction by the legendary Clarence Brown, though is now shockingly out of print and in desperate need of rediscovery. 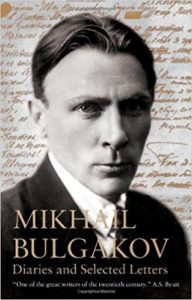 Who? Mikhail Bulgakov, well-mannered satirist, playwright and author of everyone’s favourite The Master and Margarita.

How? In a mostly extremely-direct and disarmingly honest style, particularly when addressing the authorities. His courage in places is baffling.

Why? Loving Bulgakov’s work as I do, I expected his correspondence to be overflowing with humour and imagination. In fact, there is very little. Instead, the anthology demonstrates the exasperating administrative work of a creative individual struggling against the dual bureaucracies of the state and the theatre world. His drawn-out legal difficulties are reminiscent of Lenny Bruce’s final performances, in which the censored comedian took to reading aloud from the reams of court transcription that had begun to obsess him. The confiscation of Bulgakov’s diary (including his invaluable insights into current affairs of the day) was a blow to the writer and to the historiography of primary sources concerning Stalin’s Russia; after the theft, Bulgakov never wrote another entry. Amongst the correspondences that followed is the author’s letter to Stalin himself: an incredibly open, unashamed request to be allowed to leave the USSR. Despite the sincerity, courage and unflinching frankness of this letter, Bulgakov was never permitted to make his escape. We are lucky, in respect to our understanding of the twentieth century, that manuscripts don’t burn.

Diaries and Selected Letters is available as an Alma Classics hardback. 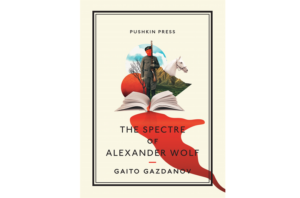 Who? Gaito Gazdanov, Russian emigre who L’Express aptly analogised as: ‘If Proust had been a Russian taxi driver in Paris in the 1930s’. Good-looking chap.

What? A metaphysical exploration of death and doppelgangery through a tense, Paris-based noir francaise (a la russe).

Why? Gazdanov’s musings on death and its existential effects on the fatalists that dwell upon it absolutely belong with the tradition of French language authors who brought morbid animation to postwar European literature – not just Camus, but Sartre, Kundera and others. The philosophy of Gazdanov, vague as it is, is hung loosely on a murder mystery/deadly double motif, and this combination gives the narrative a perfect basis for an adaptation amongst the Nouvelle Vague; as far as I know, that never was. Action begets consequence begets action begets consequence in an unfathomable and unbreakable chain, punctuated (as you would expect) by death and its surrounding aura, the catch being that in the end (like any realistic examination of life), almost all pointers led to a dead end. Gazza is purposefully obtuse, and seems happy to lead a largely-unlikeable protagonist around situations whose significance is explicitly obscured. At times indulgent, at others beautifully restrained, Alexander Wolf provides a disordered view of a disorderly subject, and deserves perhaps to be chain-smoked alongside, enjoyed, and then shelved.

The Spectre of Alexander Wolf is available as a Pushkin Press paperback.

How? Francis’ translation is plain and formulaic, perhaps due to the fact it’s meant to be read in conjunction with its Russian original by some kind of student. Reading no Russian, the plain and formulaic is all I have. Her introductions, though well-informed, are also fairly plain.

Why? The selection here, for those interested in Russian short fiction, is interesting. A few writers here I’ve been hunting down for some time (Grin and Ilf in particular); others are slowly opening drawers of joy (Zinovieva-Annibal, who also appears in Penguin’s Russian Short Stories from Pushkin to Buida); others are regular legends still willing to surprise. Francis seems to have veered towards pre-revolutionary pieces, White and Red, with a lean towards the suffering of the Russian people and an appreciation of the classic Russian Realist style inherited from the Golden Age masters. This, as always, is a turn-off, though a few break rank. Zinovieva-Annibal’s ‘Electricity’ is a lyrical vignette that fizzles to pleasant nothingness, and Zamyatin’s ‘Dragon’ holds itself together just enough to maintain readability. Bulgakov remains the don, with Grin coming in shortly behind with surprising grittiness. As an introduction to the genre, the collection is comprehensive, but not overly-ambitious. A dash more of the old Russian magic (as in Gaidar’s ‘Hot Stone’) wouldn’t have gone amiss, but then the left-hand Cyrillic did lend a little je ne sais quoi to the experience, as they might have said in a nineteenth-century Russian nursery. Reading it sick, laying in bed for an entire day, will have to be romance enough.

Great Russian Short Stories of the Twentieth Centry is available as a Dover Publications paperback, in translation by Yelena P. Francis. 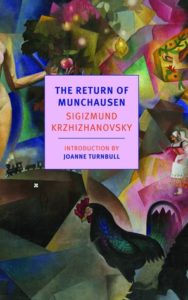 Who? Sigizmund Krzhizhanovsky, Soviet modernist and newly-discovered king of the Russian neologism, in translation by Joanne Turnbull, who is still prising his works from obscurity.

What? A jolly, jaunty novella in which the fabled Baron von Munchausen meets his match in ‘the country you can’t lie about’, the country where fantasy met fiction on the daily – the fourletterdom of the USSR.

When? Late 1920s, with a good peer into Lenin’s NEP chucked in, but only just translated into English.

Why? My chance comingacrossing of Krzhizhanovsky’s ‘Quadraturin’ in Penguin’s Russian Short Stories from Pushkin to Buida (among the greatest) immediately set off an insatiable interest in this Kafkaesque, Borgesian Soviet obscurantist. The first stop was Memories of the Future, followed by the short stories in his collection Autobiography of a Corpse, then the longer work The Letter Killers Club, and now Munchausen. Munchausen represents Krzhizhanovsky unable to shake the power of flash, filling his novella with gentle pellets of fine prose, little witticisms, dainty treats. The power of his work is in the extension of metaphor, and the thorough Soviet reflection that electrifies it. I’m not sure what Turnbull is dragging up next; I cannot wait. It is a shame only that I am too ill today to praise Munchausen or Krzhizhanovsky or Turnbull or NYRB further.

The Return of Munchausen is available as an NYRB paperback, in translation by the tireless Joanne Turnbull and Nikolai Formozov, who are single-handedly dragging this crucial lost literature out of obscurity.

‘In the all-alone lamplight of the apartment, he translated his world into systems; he buried the secrets of this world under mathematical formulae, diagrams plotting logic, tables and graphs. The systems he produced belonged with Wittgenstein and Russell, but lay in the burrows of his notes like unmarked graves.’

Pleased to say my short story Objects are the Substance of the World has been featured in Flock magazine, available to buy right here.