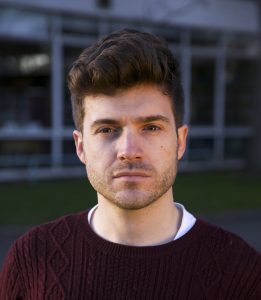 As part of my interview series Writers on Research, I spoke to author Benjamin Wood on the research process behind his novel A Station on the Path to Somewhere Better (Simon and Schuster, 2018).

A Station on the Path to Somewhere Better has been described as a ‘Northern noir’ in its depiction of the feral gloom of the north of England. In that sense, do you feel as though the rural North can be useful to writers in terms of reader associations of jeopardy and primeval violence, if those associations exist? Did you catch a sense of that topographical menace when conducting research on the geography?

Although a key sequence of the novel is set in Wasdale—which is about as remote and wild as the north of England gets—I was more interested in seeing if I could eke out the drama in the more familiar and mundane aspects of the landscape I grew up with, places like the motorway service station at Sandbach, all the Little Chefs that start appearing on the A-roads about an hour on the journey northwards. To me, these offered more opportunities for the jeopardy and violence you refer to—they’re meeting points (literal stations on the path to somewhere better), where characters can interact and unravel agendas they’ve carried in from elsewhere. Even when I was kid, I found the foyer of a Little Chef to be a weird and menacing place. I felt as though I was passing through a world of strangers I didn’t want to know.

In American road novels / movies, the truck stops and diners and gas stations always seem to have a volatile, cinematic quality, and I wanted to see how much of that I could bring out of the ostensibly drab venues of my youth. There’s something chilling, for instance, about the fact that the service station at Sandbach is effectively a mirror of itself: the same facilities are offered on one side of the motorway as the other, and they’re connected by a sinister-looking walkway that traverses six lanes of fast-moving traffic. That’s always fascinated me. So most of my interest in writing this novel came from setting myself the challenge of presenting these fairly dismal places in a fresh, invigorating, or dramatically resonant way. I was less concerned with depicting the splendour or wildness of the Lake District, but it was an inevitable outcome of having a crucial scene take place there! And, once the characters arrived, I tried to embrace all the breath-taking qualities of Wasdale and expose the more commonplace elements that surround it (hard shoulders, laybys, thorn dykes, etc.). I wanted to write about the journey to and from the Lakes, through the “pastoral inbetweenland,” as Daniel calls it. That was my main motivation really—to capture the passage through a place that seems unremarkable and infuse it with a sense of tragedy or tension.

Yes, I think in that sense the landscape certainly reflects Daniel’s psychological journey, and that sense of him being haunted or perhaps hunted by the past. The narrative is framed retrospectively, with Daniel at points forcing himself to confront the implications of his trauma, which again drives that sense of being chased through the past as in a nightmare. The past in that sense, as with his relationship with his father, is what Daniel defines himself by and against. I wondered if there was an aspect of therapy to the novel as an exercise, whether when structuring the narrative you chose to exploit that move from repression to acceptance as a story-driving device?

Writing in the past tense allowed for a fluidity between the threads of the story, which I wanted to use to my advantage, structurally. The past tense affords a reflective tone to the narration and a more natural sense of events being reconsidered, studied, picked apart, while presenting opportunities to flash-forward and include information that has been arrived at later on, and rationalised or—yes—accepted, I suppose.

In terms of structure, I wanted to give the reader a clear understanding, from early on in the book, that Daniel has survived the trauma of his past, but he’s still burdened with it and trying to understand it from a point of distance. One of the exercises therapists sometimes use is to ask a person to return to traumatic events of their childhood, bringing all the understanding and experiences they have as an adult to stand in their own shoes again, re-evaluate the moment—to understand how well they did to cope and get through it the first time. That’s pretty much what Daniel is doing in the book: he’s still working out the why of his trauma, because he already knows the what. And the reason he’s doing that is withheld from the reader until the final section, but it’s essentially a redemptive act on his part.

I’d like to delve a little deeper into the why/what of that trauma through your characterisation of the father. He is characterised as having ‘two weathers’, that is being driven by the seemingly-contradictory impulses of pride and self-pity, desire for acceptance and misanthropy. Actually there’s much more than these simple binaries existing within him, but he is obviously a character who’s purposefully split down the middle. I hoped you could explain your process of achieving this contradictory characterisation.

My approach was to allow Fran to define himself through his speech and actions (as they’re filtered through Daniel’s memory) in scenic time, and also to characterise him through the evaluation, interpretation, reflections, and speculations of Daniel and others. There are blindspots in the narrative—things about his father that Daniel can never know—and this is always useful, dramatically. Because Daniel clings to the hope that one day his father might prove his true worth, he’s looking for moments to be more sanguine about their relationship—I like to think these more tender or humanising moments give Fran a more rounded quality. For me, the challenge of writing Fran’s character was to get across his duplicitous behaviour and his unreliability, while providing a cogent sense of where his frustrations with life are derived from, and how they come to make him feel as though the world is against him. Some people are drawn to him (e.g. the many women he’s able to charm into his bed), some people like him (QC); many others see right through him, avoid him, resent him, detest him. I tried to get across as much as I could how others view him, and how the judgments of others might infect his psychology over time.

One of the more difficult aspects of A Station on the Path… in terms of accessibility of meaning is the story-within-a-story provided by the diversions into Daniel’s audiobook series. The series he’s listening into, with which he connects his father’s anecdotes of working on the screen adaptation, overlays a YA fantasy narrative onto the road trip structure that carries the central thread. I wondered in terms of plot design how integral the internal narrative of the series, The Artifex, was to the overall structure. Did you find designs for The Artifex influencing your ideas of Daniel and his story, or did Daniel’s story feed more directly into your idea of The Artifex?

I intended the excerpts from The Artifex Appears to become more overtly resonant with Daniel’s own experiences as the book progresses: the more that he listens to the book on tape, the more the reader starts to see connections between the two tangential narratives. Both stories feature characters who purport to be something they are not: they present images of themselves they can’t sustain. The Artifex TV show begins as a benign fixation for Daniel—it’s what connects him to his father—and the audio book he brings on the journey becomes a coping mechanism for him, a thing that dulls the agony of his experiences and literally gives him a distraction from the tragedy of his life as it’s unfolding. As he gets older, he comes to see the overlaps between his own story and Albert’s in The Artifex. Part of my aim for these sections was to disconnect readers from the violence and horror of the novel, too—to take them out of Daniel’s world for small pockets of time so that they could anticipate what follows next and recalibrate, prepare themselves for the next emotional upheaval. There’s a good deal of harrowing stuff that happens, so I wanted to flatten the story out here and there, to reflect Daniel’s own experience of listening to the book on tape.

To finish up, I’d like to ask about the novel as an act of research in and of itself. I’ve asked about the possibilities of ‘Northern noir’ and the repression motif which helps carry the narrative, but I wondered if you think the novel has a more specific question hidden at its centre. If the novel itself were functioning as a question, put to either the texts that came before it or to our notion of the world, what would it be asking? And does it point to a potential answer, either in itself or elsewhere?

I wrote the novel to investigate the legacy of problems in a family: how your parents’ mistakes can be inherited and repeated, or—with a bit of luck—averted. It’s as much about the small psychological injuries inflicted on Daniel as it is about the major, distressing incidents he’s forced to witness. As bleak as this novel can seem at times, I was aiming to write something that provides some hope that cycles of trauma can be stalled or overcome. And I’ve been lucky to get correspondence from readers around the world who’ve identified with the issues the novel examines; some of them have told me how it connected with their own experiences and helped them see a way forward in their own lives. That’s easily the most rewarding thing to have come from writing the book, and the most valuable justification of it as a piece of ‘research’ from an academic standpoint, I would say.

Benjamin Wood’s first novel The Bellwether Revivals was published by Simon & Schuster in 2012. It was shortlisted for the Costa First Novel Award and the Commonwealth Book Prize, and won one of France’s foremost literary awards, Le Prix du Roman Fnac. While serving as the British Council’s Writer in Residence in Istanbul, he began researching and writing his second novel, The Ecliptic. It was shortlisted for the Encore Award 2015 and was a finalist for the Sunday Times/PFD Young Writer of the Year Award in 2016. His most recent novel, A Station on the Path to Somewhere Better, was shortlisted for the CWA Gold Dagger Award and the European Union Prize for Literature in 2019. Benjamin is a Senior Lecturer in Creative Writing at King’s College London, where he teaches fiction modules and founded the PhD in Creative Writing programme. Before this, he taught for nine years at Birkbeck, University of London, co-founding and directing its undergraduate writing degree. ​He lives in Surrey with his wife and sons.