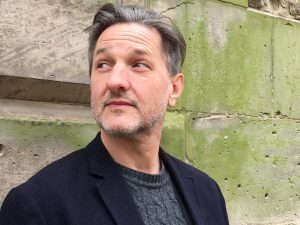 As part of my interview series Writers on Research, I spoke to author C.D. Rose on the research process behind his collection The Blind Accordionist (Melville House, 2021).

As all unpublished novelists know innately, there may be more ‘undiscovered writers’ now in existence than ‘discovered writers’ at any point in time. Our global reading list only expands, and at an exponential rate. In that context, I’d like to start by asking simply – why Maxim Guyavitch? As a scholar of a ‘lost writer’, and as a compiler of ‘lost work’, why do we need Guyavitch? More glibly, what has Guyavitch ever done for us?

The answer to that, I think, is everyone. We all need more – or, at least the opportunity (however distant) to read more, or the knowledge that there is more there. You don’t have to read everything, after all. Nobody’s demanding you give up your entire life. Books will wait, for a long time, if necessary.

I think it’s the question that’s the problem here. What do any writers do for us? Guyavtich has done nothing for us; the question is: what we can do for him?

There may be something there, though I still wonder what separates Guyavitch from other similar writers of the age. In that sense, I feel like there’s an extent to which Guyavitch’s work embodies something of Europe in the time before it was carved up and devoured by capitalism and Communism, that lost world. As the Afterword to The Blind Accordionist points to, there are connections to be made with Schulz, Babel, Brodsky and others – all writers who work within ambivalent spaces, ambiguous forms. What do you feel it was, in the spirit of Europe before the Second World War, that informed these writers’ (and Guyavitch’s) proclivity for the ambiguous and the ambivalent?

It was certainly no Arcadia, especially if you were Jewish, or Gypsy, or any other ethnic minority. But James Joyce lived for a good while on the tip of Mitteleuropa, and later claimed he’d never been so happy as when living in the crumbling Austro-Hungarian empire. I wonder if it was something to do with the uncertainty caused by ever-shifting borders, the mixing of so many ethnicities and languages, the possibilities of the still-fresh Romantic nationalism before it coalesced into something poisonous, the legacies of so many traditions (Kabbalistic philosophers rubbing up against itinerant storytellers – the culture whose loss Walter Benjamin laments in his essay ‘The Storyteller’), a literary culture not bounded by formal restrictions (such as that of the novel) or genre limits.

All that, added to the risks of being in the wrong place at the wrong time, and never really knowing where that place might be, would almost inevitably produce a literature that might seem rich in ambiguity and ambivalence, I think.

Running with that idea of ‘genre limits’ for the moment, I’m interested in David Kingston’s classification of ‘the Whimsical’ – that is of a genre of ‘Whimsical literature’ that should be considered as valid as the Romantic, Pastoral, Gothic, etc. As your Afterword notes, Kingston provides a number of examples of Whimsical literature, but I wonder if you concur with his definition. What is Whimsy in literary terms, and what aspects of it, if any, do you find in the work of Maxim Guyavitch?

I neither agree nor disagree with Kingston’s classification; I included the reference to (and excerpts from) his essay simply because I thought it may be of interest to any potential Guyavitch scholar. At its worst, I think the Whimsical is some slightly stunted form of imaginative creation, a reification of the trivial. At its best however (and I think it can be very good), it is both weird and eerie (using Mark Fisher’s definitions), yet also with a comic dimension. It’s a re-investigation of shadowy corners of childhood, as well as a distinct aesthetic tradition all of its own, lurking somewhere between the heimlich and the unheimlich.

I don’t, for the record, think that Guyavitch’s stories are whimsical at all.

That I understand, and I think that fits with my general notion that Guyavitch is perhaps a writer that’s ‘hard to pin down’. Some of the core themes running throughout The Blind Accordionist are those of forgery, fraud and disguise. Other than the obvious allusions to deception that those themes imply, I’m interested in their relationship with replication, translation, duplicity – the way that forgery, for example, produces a doppelganger, a shadow. I’m curious to know where you find the links, if at all, between forgery, duplicity and Guyavitch’s stories.

Forgery has fascinated me in that often it requires the application of extreme skill to utterly pointless ends (or, if not quite pointless, then dubious at best.) Duplicity is an awkward term in that it implies both ‘doubleness’ and ‘deceitfulness.’ Is there a link between those things and Guyavitch’s stories? Quite possibly. Is Guyavitch, through his work, hiding something while also attempting to tell us about it? Almost certainly.

I’d like to close by asking whether you feel, in the same way that I do, that Guyavitch is to an extent made alive within the text. To what extent, through this collection and your scholarly work, does Guyavitch continue to speak to us in a living voice, in the twenty-first century? Is there a future to Guyavitch research?

The absence of voice in written texts, and its paradoxical remaining trace, fascinates me – in short stories particularly. I’ve long been trying to prove the unprovable thesis that it is this quality which defines a short story. It is one of the things which makes the ghost story the short story form par excellence, I think.

Guyavitch is no longer a living voice, but quite certainly a ghost, one whose non-presence haunts us all – calling us to remember that which was never remembered in the first place.

I certainly hope that this new edition of the nine stories will set in motion a whole new cycle of Guyavitch research.

C.D. Rose is the author of The Biographical Dictionary of Literary Failure, Who’s Who When Everyone Is Someone Else and The Blind Accordionist.