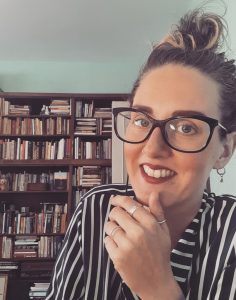 As part of my interview series Writers on Research, I spoke to author Hannah Stevens on the research process behind her collection In Their Absence (Roman Books, 2021).

In Their Absence opens with a quote from the eighth century Chinese poet Wang Wei: ‘When you are gone, there’ll be no answer to the questions…’ That theme of the pain caused by unknowing is of course a core motif of the collection, and a type of pain I think most people will identify with, however obliquely. With that in mind, I’m curious as to what first drew you to the subject of missing persons, and what in your thoughts and feelings compelled you to explore that through fiction.

‘Missing’ has always been a preoccupation of mine in one way or another. I’ve always hated losing things: keys, random everyday items at home. I just can’t relax until I’ve found them and know where they are.

I’ve always been preoccupied with missing person cases as they popped up in the news too. I found it so mind-blowing that a person could just disappear and that so many people could have no idea what had happened to them. I think I really started to focus on the theme of missing people after I wrote my collection Without Makeup and Other Stories (published 2012). That collection included a version of ‘Knowing Something by Heart’ which is also published in In their Absence. It’s about a child who goes missing, the aftermath of that and the effect on the family left behind. I think the last line of that story really stuck with me: ‘All of these missing people; if they go of their own accord, why do they go? And if they’re taken, why are they never found?’ and I wanted to explore this further.

People go missing for so many different reasons. It can range from abductions and trafficking to people who choose to disappear after relationship breakdowns or financial problems for example. And then some people don’t mean to disappear; they just drift out of touch with their networks, and this could be because of mental health issues or issues of addiction. So it’s a hugely diverse and complex issue, of course, because people themselves are.

Even though I’ve researched the theme of missing people extensively I still cannot fully comprehend the horror of the not-knowing.

Absolutely, and again I think that sense of being overwhelmed is something I think a lot of people will relate to. I find when thinking about the sheer number of persons still missing, it’s hard to process them as individuals and not simply statistics. In following the lives of missing persons and those ‘left behind’, I feel like this collection writes into that empathy gap, humanising its subject through the myriad of circumstances that might lead to someone going missing, as you allude to above. Speaking speculatively, do you think this empathy gap can ever be bridged? Does fiction have a genuine role in bridging that gap, as writers often claim?

I really do, yes. For In their Absence I researched a lot of factual, real-life missing person events and there are vast numbers of them. The collection of stories I wrote is, of course, fiction but in some ways they’re essentially creatively assembled or reassembled from a number of the narratives I’d read during my research. I think the stories in some way or another are representative of the experiences of people who have been affected by the issue. Ultimately fiction is still about human beings and their experiences, and communicates the pleasures and pains people experience. So I think all stories humanise the statistics in one way or another.

I also feel that short stories are a particularly good form for humanising missing person statistics as they are a form that is based on absence: on what you don’t say, what you don’t tell, what happens outside of the page.

One story that jumped out at me was ‘Laughter’, a flash fiction piece about a woman who discovers her lover is an undercover police officer. Was this inspired at all by the story of activist Kate Wilson, whose ten year fight against the conduct of the Metropolitan Police has just concluded with the IPT confirming the Met violated her human rights? What are your feelings about Kate Wilson’s situation, and how that reflects on the idea of the complex pains of abandonment?

During my research into missing people I looked closely at the police as an organisation involved in processing and helping in missing person cases. But during my research I found an organisation called Police Spies Out of Lives. Police Spies Out of Lives is a group that was set up to help women duped into relationships with undercover police officers. It was set up by women personally affected by the issue and the group works to offer continued support to those affected and to campaign for justice. Kate Wilson’s story has been covered quite extensively by them and I have followed it.

Through this organisation I became aware of a number of incidents where women had been duped and lied to by undercover police officers (largely men). The story Laughter was inspired by a man known as Bob Lambert. He was an undercover police officer who had created the fictional persona of Bob Robinson to spy on political activists. He duped a woman into a sexual relationships with him and actually fathered a child.

Of course all of these incidents horrifying abuses of power. It is terrible enough when someone you know and love goes missing but what if you find out this person you loved and had a child with is not just missing but never actually existed at all? It would be incredibly damaging. It would be exceptionally difficult to grieve or come to terms with this absence when everything about your life before was based on somebody who was lying to you about so many fundamental things. I mean, you are not grieving for the person who was lying to you, who was duping you, but for a person who was invented or constructed, and who therefore never existed at all. What a complicated thing to process.

I think Kate Wilson and others who have pursued this case against the Metropolitan Police through the courts have shown immense courage and dignity and in the face of such a horrible thing.

Finally, I’d like to go a little deeper into your approach to characterisation. Recently I spoke with Jenn Ashworth about her novel Ghosted, which is narrated by a woman whose husband has disappeared. One of the most interesting things that came from our discussion was the idea that at all times (though particularly under stress/grief), people think and behave as though ‘divided in themselves, inconsistent, strange to themselves’. That quote came back to me over and over while reading In Their Absence, as your characters found themselves behaving in ways otherwise inconsistent with their self-image or what others expected of them. Does this ring true for you? Do you feel as though stress allows your characters to  behave unexpectedly, to do incomprehensible things?

Your question about stress is interesting, but perhaps a bit wide of the mark. Stress is a part of life. And it’s certainly one of the things that makes people behave unexpectedly. But not the only thing. It’s actually quite weird to think that people, when left to their own devices, will behave in ways that are wholly expected or predictable. We all do incomprehensible things sometimes, for incomprehensible reasons, even if we’re not stressed. Because human beings are just a bit weird aren’t they? So one thing fiction can do, is testify to the strangeness of human life, to its unpredictability.

Hannah is a queer, working class writer with a PhD in creative writing. Her short story collection, In their Absence, exploring missing people and broken lives was published early 2021 by Roman Books. Hannah has published short stories, flash fiction and creative non-fiction widely, including in Archer magazine (AUS), Litro (UK) and Loose Lips (CAN). Her stories have been anthologised in award winning books from Valley Press and by small press publishers Unthank Books.

Hannah teaches creative writing in universities, colleges, schools, the community and NGOs across the world, and she often writes on the themes of gender, domestic abuse, equality and LGBTQ+ issues.

One thought on “INTERVIEW: Hannah Stevens on missing persons, #spycops and ‘In Their Absence’”