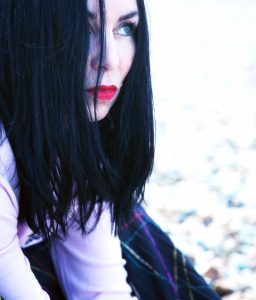 As part of my interview series Writers on Research, I spoke to author Heidi James on the research process behind her novel The Sound Mirror (Bluemoose Books, 2020).

One of the epigraphs that open The Sound Mirror is from Jean Genet’s play The Balcony: ‘It’s a true image, born of a false spectacle.’ I wondered why this particular line stood out for you, and whether you think (as jumps out for me) that there might be a link between Genet’s juxtaposition of the spectacle and the image and the process by which writers transpose ‘real-world material’ into fiction?

Yes, it’s precisely the link you describe, and those words ‘spectacle’ and ‘image’ both infer the quality of transience, of performance, and of being the audience or the viewer. There’s something about Genet’s phrase that perfectly articulates the slippery qualities of ‘true’ material that we might mine to tell a truer story, that itself is a fiction, a spectral composition that haunts. In the lives of the characters I was writing, much of their behaviour is spectacle, by which I mean, a way of being that is prescribed, ordered or expected by cultural norms; not necessarily that which is authentic or responsive. More prosaically, fiction often gets to the heart of a story in a way that mere facts can’t.

That idea of fiction as ‘spectral composition’ reminds me of the recurring voice that comes in and out throughout The Sound Mirror – what I’d be tempted to call the collective narration of the characters, their antecedents and later descendants (perhaps you’d describe it differently). This voice, which permeates the novel, claims to ‘lead’ the action, almost as a kind of homogenised natural force. I wondered if there was anything specific in your reading for the novel that brought you to this idea, particularly in terms of working to frame family histories as an unbroken historical narrative, as you might find in Marquez for example.

My PhD was in trauma theory, so much of the research for that inhabits this idea of a collective ‘voice’ or perhaps collective experiences that are archived in the cells, in our DNA. The names of the main characters (Gail, Tamara, Claire and Ada) represent AGTC, the base pairs of DNA. We know that trauma can be epigenetic but there’s also research to suggest that trauma can be passed on intergenerationally. It’s this unbroken narrative of trauma (both personal and societal) that the voice is expressing – this long chain of mothers bequeathing damage – but also strength, resilience. There’s a Bessel van de Kolk text, The Body Keeps the Score ,that is really interesting on this too. All of this came together to create that idea of the body, at a cellular level, as traces of all the other bodies that preceded us (an archive as I said), that we aren’t individuals but enmeshed in our many others, all overlapping and wrestling for attention. Alongside this I was reading a lot of Mark Fisher’s incredible work and thinking about Derrida’s hauntology. Then there’s the voice too, the actual voice with which we speak, our accent, our vocabulary, the idioms we use; all informed by our circumstances, physiology, education, location – again overdetermined and coming together as self-expression and yet, is it? Which self?

I’m really interested in your idea of seeing human beings not as individuals but as overlapping multiplicities, something that rings very true for me. I think we can find that in the structure of The Sound Mirror, in the way it follows three discrete narrative threads, occupying three distinct temporal locations but ultimately culminating in one coherent narrative. I wondered to what extent the research for each thread informed the narrative design of the others. Did you find that as your research shaped Tamara for example, your visions of Claire or Ada began to change? Were there places where history supplanted or encroached on your original designs?

I wanted the prose style to reflect each time period and character closely. I worked to keep the narrative as close as possible to the characters, using third person/free indirect style. So, Tamara is contemporary, the prose sharper – the past intrudes on her in a way it doesn’t with the others as she is one in whom all the trauma culminates. Those interruptions, fragments and breaks are a way to try to write the way PTSD flashbacks muscle in on the present – it ruptures time. Tamara is also the one character that the collective ‘voice’, or we might say, the mothers, all cluster around and discuss. For Ada and Claire, it was a question of finding the right style and language to flex with their very different backgrounds, education, class and situations. For Ada’s sections, I wanted the narrative to read like a novel of the era, something she might have read, as what we read can often shape how we tell the story of ourselves. I hope there’s a shadowy self-consciousness to her passages.

It felt like I was writing three different novels at times, and in the end I wrote each one in an unbroken linear way, then smashed them up and interwove them. As the novel is based on the lives of my grandmothers’ I didn’t find anything encroaching on the design, I just had to go with it all.

Interesting. I was struck then by your shorthand for the ‘collective voice’ that we discussed earlier as ‘the mothers’, which of course in a very formal way they are. Certainly (it seems to me) one of the core strengths of The Sound Mirror is the way the structure naturally draws comparisons between these various women’s lives, and how they affect each other across time. Naturally you were working with material from your family history as a baseline, and this may be a loaded question, but did you encounter any problems in researching the historical lives of women in general? Particularly in terms of what can sometimes feel like a lack of meaningful material on so-called ‘domestic life’?

I would’ve, I’m sure, if I’d had to do a lot of research. I was raised mostly by my grandmother, and was always an avid listener, as she was a prodigious storyteller. All of this stuff was just there in my memory, waiting. I read some personal accounts of Anglo-Indian girls and women around the same age as Ada and that was helpful, but the few I found were self-published… There isn’t a great deal of material about that time from this perspective; as per usual it’s all mostly written from a more privileged position. In part I wrote the novel to redress the lack material about the domestic, about these women’s lives – impacted as they were by colonialism, war, politics etc. The domestic in this sense is the point in which all that is outside is incorporated into the intimate space of our lives and impacts everything. There were some funny moments when a well-meaning reviewer wrote to me to tell me I’d got some dialogue wrong (their father was from the East End of London etc. etc.) and of course, I hadn’t, I’d heard it from the horse’s mouth as it were (and Claire wasn’t a Londoner!).

That idea of the external being incorporated into the internal seems so core to me, a really central, driving motif for The Sound Mirror. To close up I’d like to ask what I’ve already asked several writers during this interview project, something I’m particularly keen to get your thoughts on. Thinking in terms of writing as a form of research, as a process of investigation into the nature of life, is there a particular question that you hope The Sound Mirror raises in your readers, and has the process of writing this novel begun to answer that question, in any way, for yourself as the writer?

If there is a question, it would be to consider the consequences of our actions and choices, the repercussions that may ripple out for many years. It was a form of exorcism, a rite to cleanse my family, to conjure my grandmothers’ stories up, to release them, to witness them, in all their complexity – an abreaction, I suppose. It worked.

Heidi James is the author of critically-acclaimed novels Wounding, So the Doves (a Sunday Times Crime Book of the Month) and The Sound Mirror. She won The Saboteur Award for her novella The Mesmerist’s Daughter and was a finalist in The Cinnamon Poetry Collection Prize. Her short stories, poetry and essays have been published in various anthologies and magazines including, among others, We’ll Never Have Paris, Somesuch, Dazed and Confused and Galley Beggar Press. She hosts a podcast, First Graft, where she discusses writing and procrastination with other writers.