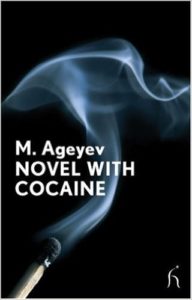 What? A faux memoir of Vadim Maslennikov, a kind of Muscovite Holden Caulfield, with cocaine.

Why? When I first read A Romance with Cocaine, I myself loved the drugs. Not to the extent of the writhing-in-self-loathing Maslennikov, or Burroughs’ Junky, or Hunter S. Thompson, but a beyond-casual interest. I remember Ageyev’s fiction as romantic, panelled with dark wood, chiaroscuro, smoky. Actually, it is dull, as most accounts of drug abuse are, and lacking poetry. The narrator is unlikeable, though consistently-voiced, and the characters that surround him are largely one-dimensional. It was an absurd scholarly error for A Romance ever to be linked with Nabokov, who even in his juvenilia surpasses the imagery of Ageyev. Since the book has remained the same since my last reading, I can only assume that I, for better or worse, have been altered.

A Romance with Cocaine is available as a Hesperus Modern Voices paperback, in translation by the legendary Hugh Alpin.