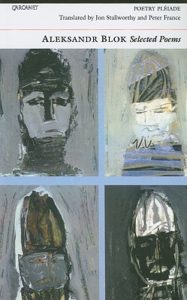 What? A short collection of his mystical, gypsy, woeful, drunk poetry.

How? Through a well-constructed anthologising of his work, sewing the narrative of his progressing ideas, mounting his most famous pieces (incl. ‘The Twelve’, one of the most ‘important’ Russian poems of the twentieth century) on the intricate, intoxicated glory that preceded them.

Why? Blok is widely-renowned as the most influential Russian poet of his day, but does that make him worth reading? His importance for writers like Tsvetaeva, Mandelstam and Akhmatova is gargantuan; you could go out on  punt and say he was the greatest poet since Pushkin. And that seems to be how a lot of Blok-criticism is approached; his figure, even in its drunk, romantic way, is unfeasibly large. Whether the poems justify this is irrelevant; better, I think, to read them at arm’s-length, taking in the ecstasy as a modern reader, open to enjoyment. In these terms, Blok is lofty, musical, metaphysical. His voice speaks a little of the ‘holy fool’ archetype, especially in its drunkenness. It is poetry that makes you want to drink alone, read and approach dark thoughts. Perhaps a more pertinent question is: why would anyone want to drink and think?

Selected Poems is available as a Carcanet paperback in translation by Jon Stallworthy and Peter France.