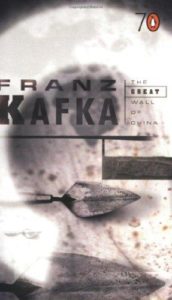 Who? Got to be FK, original paranoid android.

What? A half-dozen short stories selected for the Pocket Penguin collection. Aeroplane material, digested happily on an EasyJet to Sofia.

When? In typical Kafka-esque chronology, the title story was written in 1917, published in 1932, translated into English in 1933, and compiled by Penguin in this edition recently enough.

How? How else but through the old familiar Czech clamped jaw? Poor lad.

Why? Kafka is a given, at least for the moment. It would not have been a tragedy if he had managed to destroy his manuscripts as intended; the idea that we would have been robbed of a literary treasure equates exactly to our lack of mourning for the literatures we have already (hypothetically) been robbed of. Regardless, here he is, canonised; his portrait is met with ‘awww’s, ‘poor lad’s and all the rest. His repression lends him sympathy, even if the stories are burnished with the same boredom found in the bureaucracy he felt himself lost in. His feeling is of something almost-rounded, almost-complete, like his unfinished Amerika, and almost touching on the same quiet, dull-burning oppression of self I feel now and most days. Everyone finds a kindred spirit in Kafka – that is the assumption. But he will always remain the victim, and we will not always identify as such.

The Great Wall of China is available as a Pocket Penguin paperback, number 64.