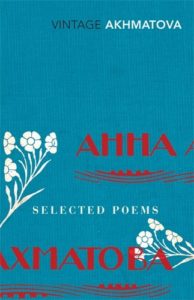 Who? Anna Akhmatova: Soviet-era poet of the absolute highest order.

What? Now That’s What I Call Russia’s Most Significant Female Writer in Any Genre’s Greatest Hits. Evidently, poetry is getting to me.

How? The poems flow chronologically, with some of the dating purposefully thrown by Akhmatova herself in order to throw, in turn, the Soviet censors. Throughout, her verse remains lofty and cold, a view of Earth from the atmosphere.

Why? When will this poetry end? To Akhmatova I’ve brought my exhaustion: an unfair burden but one she did not support. The final poem in this collection, the 22-year triptych Poem Without a Hero, brings my short sojourn into Soviet era to an abrupt end, unless the temptation towards Pasternak becomes too great. This poem is, for some reason unknown to me, the only one I can say I truly enjoyed. The rest (why, isn’t she the one everyone else looked up to?) tired me, bored me, even riled me in places; though in others, teased me, placated me, showed me unfamiliar parts of the world. Would it be more fair to withhold my judgement, clouded as it is by my frustration with too much poetry? Let’s do that. I will return to her in ten years or so, or perhaps never, or maybe before the TARP is out. Such high hopes.

Selected Poems is available as a Vintage Classics paperback in translation by D.M. Thomas, with a foreword by everyone’s favourite GCSE Laureate Carol Ann Duffy.