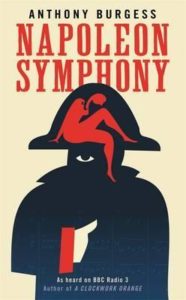 Who? Anthony Burgess, author of Clockwork Orange: The Musical! (And famous novel, my droogs).

What? A barmy, super-postmodernistical jaunt through the life of Napoleon Bonaparte, with a cute little poem on the end about how and why he bothered to write it.

How? Following the architectonic structure of the great Beethoven’s Symphony #3 in E flat, op.55 Eroica (his homage-symphony to little N): Allegro con brio, Marcia funebre (Adagio assai), Scherzo (Allegro vivace), Finale (Allegro molto). This was not a little disheartening to discover, as my own work-in-progress follows in an almost indistinguishable manner Mozart’s Piano Concerto in A Major (K488): Allegro, Adagio, Allegro assai, with the addition of an expository Prelude. Still, nothing new under the sun.

Why? Since Burgess has a fair few (in fact, too many) novels in circulation, it’s hard to know where to go after A Clockwork Orange. Getting round to M/F and This Man and Music (his music theory book) has been languorous and as yet unfulfilled: still, Napoleon Symphony was a surprising incentive. It is no place to start with Burgess; the work’s density, ambiguity and vocal palette at times approaches the swirly-wirly polymathematic chaos of a Thomas Pynchon, but therein lies the charm. The Symphony is bold in its vocabulary and neologisms, and textured with an overwhelming sense of linguistic daring. The poems that pepper the book are mostly useless, that is, without use (but who’s to argue?); otherwise, the narrative shines through the postmodern babblings like sunlight through greased paper. The Symphony, alongside A Clockwork Orange, belongs to a canon of implied genius; it must contribute to the greatest works of postmodern British fiction, and should provide a thorough inoculation against the infuriating water-treading that is the modern British book market.

Napoleon Symphony is available as a Serpent’s Tail hardback.