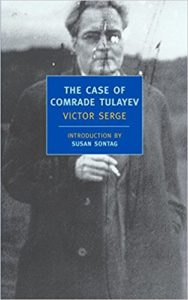 What? The greatest novel (I’ve come across) on Stalin’s Purges, unrivalled. To the Terror what Platonov’s Foundation Pit is to collectivisation.

When? 1940s, in exile from everyone in Mexico. Even the Mexicans wanted rid.

How? In a telescopic, scene-hopping march through various characters introduced and examined sequentially, like a series of mugshots.

Why? Serge has only one clear stylistic parallel, one he might not have appreciated: Ayn Rand. Perhaps he would not have been all that surprised. Both escaped and reviled the bleak, violent bureaucracy of the Soviet Union; both confronted head-on the pitfalls of political machination; both used their characters as functionaries for the accusation of a state’s shortcomings. They share also the same tendency to lift detail out of superfluity, and to mix passages of great lyricism with a constant, burning drive towards the turning of pages. I ate Comrade Tulayev, walking with it in the street and bumping into stuff. It is a joy to know that Serge has half a dozen more.

The Case of Comrade Tulayev is available as a NYRB Classics paperback, in translation by Willard R. Trask, with a cracking introduction by Susan Sontag.