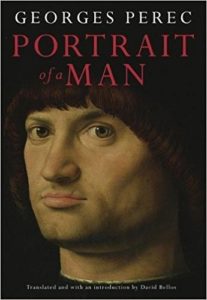 Who? Georges Perec, French puzzler and author of Life: A User’s Manual (long and boring) and the lipogrammatical A Void, the book sans ‘E’ (short and clever).

What? His long-lost first novel, a claustrophobic teaser focusing on a forgery of Antonello da Messina’s portraiture. Also features a good old-fashioned murder.

When? Written in the 1950s, rejected by publishers, lost for ages, and not released until well after Perec was mort. The story of its discovery is a tale in itself, and can be found in Guardian-speak right here.

How? Perec is as elusive and jumbled as you’d expect, though his use of jumbledness is expert considering he was only 24 when he wrote the thing.

Why? I couldn’t be disappointed by the fact that almost nothing happens in Portrait of a Man. There is a murder, there is a love interest, there is a guy locked in a basement painting the Old Masters, but essentially, the lack of action is the whole draw. Perec’s writing is as always encyclopaedic in scope, ambitious in timbre and absolutely intellectually-inviting. Though it could never stand up to the inventive playfulness of A Void, A Portrait of a Man remains a static mini-masterpiece.

Portrait of a Man is available as a Maclehose Press hardback, translated and introduced by David Bellos.