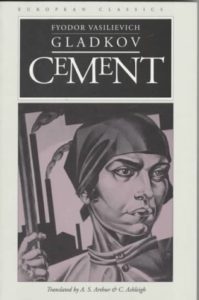 What? An intense, populist political novel on which countless others would be modeled: the tale of a homo sovieticus finding his way in Lenin’s brave new world.

When? 1925, in the midst of the New Economic Policy, designed to revitalise industry and trade.

How? Gladkov’s style, especially in his choice of fixtures for the narrative arc, is difficult to pin down. His frequent descriptions of natural and industrial settings are ambiguous in their bias; both are described as being places both alive and dead, both are in need of radical transformation under Communist will. His characters are complex caricatures, functionaries, often painted with broad judgemental strokes but lacking believable emotional depth. The action is driving, well-paced, but burdened with ideology and with a contorted logic. Cement, though not especially well-written, moves with a fascinating and unusual impetus.

Why? The most shocking aspect of Cement, in light of its place as the forerunner of the socialist realist genre, is how critical Gladkov is of the Communist infrastructure of the 1920s. I had sat down with Cement expecting a pure, magnanimous piece of propaganda, but the world Gladkov describes is sincerely bereft of idealisation, even in its gross generalisations. His portrayal of the bureaucratic mafioso within the Party is uncompromising, as is his descriptions of the suffering inflicted on ‘former people’ (the bourgeoisie, kulaks, etc.), the savagery of the Russian proletariat, the pointless cruelty of the show trial, the linguistic black hole that was ‘Sovietese’, the failure of the childcare system, the inconsistent logic of the New Economic Policy, and so on and so on. The country to which Gladkov dedicates his passion is one not just in need of development, but one that demonstrates inherent flaws whose dangerous influence remains even at the conclusion of the novel. In this sense, Gladkov achieves a moral ambiguity I am astounded was so lauded by the regime for such a long time. Cement is an incredibly important and engaging read, though perhaps not for the reasons it intends.

Cement, though out of print in English, is available somewhere as a Northwestern University Press paperback, in translation by A.S. Arthur and C. Ashleigh.