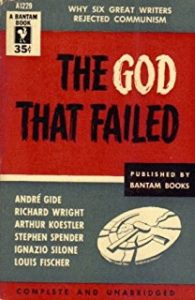 What? A compilation of testimonal essays from literary folk who once loved Communism, and then didn’t. A few of lads changed their minds after visiting the Soviet Union in the 1930s, which is probably fair.

When? Compiled in 1949. The copy in front of me is older than most grandparents.

How? The essays, lucid to the point of depression, are separated into two categories: ‘The Initiates’ and the ‘Worshippers From Afar’, that is (as far as I can remember), those who joined the Party proper and those who didn’t bother.

Why? As a study of Communism as a political concept, the title is misleading in its level of usefulness. Rather than confront any flaws in the core tenets of the idea, most of the contributors explain their falling away from the herd in terms of their alienation with the Party itself. Their disillusionment is sourced almost completely in the international Communist movement’s refusal to admit basic truths, including the truths about its own destructive capabilities. Only Stephen Spender lends a few paragraphs to the anti-individual nature of Communism itself, and even he fell out with the Party on social grounds. The essays then are more a reflection on how the international movement failed to assimilate with the USSR, and consequently failed to achieve normative, non-repressive consistency within itself. The failure of the Party however is far from singular. In that sense, the god of the planned cultural economy has, for better or worse, failed.

The God That Failed, though long out of print, can be hunted down as a Hamish Hamilton hardback.