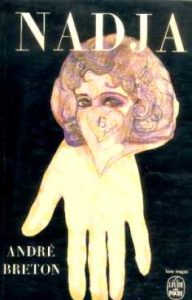 Who? Andre Breton, the founder of Surrealism, friend of the famous, all-round Frenchie.

What? A sort-of novel, a mix of fact and fiction, including 44 photographs illustrating the history, art and life surrounding Breton’s relationship with the enigma ‘Nadja’.

When? 1928, and screaming Parisian chic.

How? Breton structures his novel in several disparate, concrete sections, moving suddenly from ramblings about Paris life to anecdotes on his lover to musings on existence and psychiatry. Its scattyness however is one of Nadja‘s primary draws.

Why? Nadja is, using a sideways motion, a powerful story delicately told. Disregarding Breton’s experiments in form and style, the account of his changing attitude to his lover, as well as her psychological demise, is completely unsentimental even in its fantasy. The beauty of Nadja is, as he implies, ‘CONVULSIVE’, in as much as the emotions evoked by it are as erratic as the subject herself. Breton consistently dodges expectation by jumping from the banal to the existential, the everyday to the extraordinary, and does so in a way that brings out the power of chance in the real world. Breton is not bound by the Surrealist manifesto he once espoused; in fact, he is more tethered to reality than he might like to admit.

The wonderfully tragic Nadja is available as a Penguin Modern Classics paperback in translation by Richard Howard and with an introduction by Mark Polizzotti.