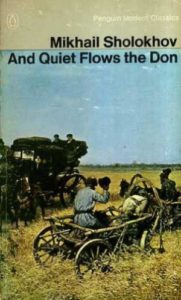 Who? Mikhail Sholokhov, celebrated writer of Cossack stock, soldier and uber-realist of a socialist bent.

What? 566 pages of Don Cossack life, wending its epic way through the turbulence of World War I, the Russian Revolution and the following Russian Civil War.

When? 1929, and since ‘one of Russia’s most sacred works of literature’ [Independent].

How? Sholokhov leads us through peacetime and war-upon-war with equal detachment, truly epic, truly Russian.

Why? Comparisons to Tolstoy are natural, let’s not waste time with them. Sholokhov builds a picture of Russian life that surpasses most other socialist realist in its compassion for the Cossacks, and, like Gladkov’s Cement, maintains a level of critique uncompromised by the book’s political goals. It is however, incredibly long, and wait – where’s the protagonist gone? Where’s his wife and lover? And who on earth are all these people? Who cares? We will never know. That, perhaps, is the ultimate essence of the Russian epic.

And Quiet Flows the Don is available as a Penguin Modern Classics paperback, in translation by Stephen Garry.