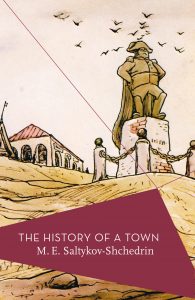 Who? M. E. Saltykov-Shchderin, pronounce it at your peril.

What? A Russian satire in the vein of Gogol, though much, much funnier.

How? An historical account of a small fictional Russian town (Glupov) over one hundred years, examined in proxy via its tyrannical yet inept rulers.

Why? Saltykov-Shchedrin is definitely in competition for the funniest Russian novel of all time, and only falls short of Bulgakov’s efforts much later. As a satire, it must be seen as the base for many state-sceptical works: its boldness in the portrayal of government officials and civil servants is a highly inventive invective. Foote’s translation reads like a dream; it is, considering the epoch of the source material, extremely successful in flow and timbre. If only all novels on the sufferings of the Russian peoples were such a dandy delight.

The History of a Town is available as an Apollo paperback, translated by I. P. Foote and introduced with some gusto by Charlotte Hobson, recent author of The Vanishing Futurist.