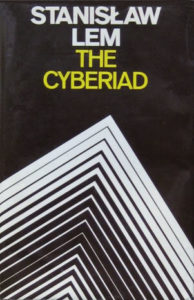 Who? Polish science fiction legend Stanisław Lem, the chap who wrote the story for the film Solaris.

What? A series of whimsical short stories following the escapades of two robot engineers (that is, robots who are also engineers – although they do make further robots), the annoyingly-named Klapaucius and Trurl.

How? Guiding the robots through a vaguely-connected series of anecdotal scrapes, usually facilitated by the pair’s struggle to satisfy the overstretched specs of their (typically royal) employers.

Why? Lem’s stories, flush with scientific, philosophical and political absurdities, fall somewhere between Italo Calvino’s Cosmicomics and Douglas Adams’ Hitchhiker’s Guide: funnier than the first, meatier than the latter. Lem’s visions of failed utopian projects are particularly poignant when considered under the oppression faced by science fiction writers in the Soviet Bloc, and those stories which are not utterly ridiculous are actually full of insight. It is unfortunate in part that these insights are often buried under operatic space babble and endless, exhausting neologisms, but regardless the core does not suffer meltdown. The Cyberiad has an atomic quality and, like Calvino’s Cosmicomics, allows itself the scope of universal creators and destroyers. It is also, aptly, rather silly.

The Cyberiad is available as a Penguin Modern Classics paperback in an ambitious  translation by Michael Kandel with illustrations by Daniel Mroz.