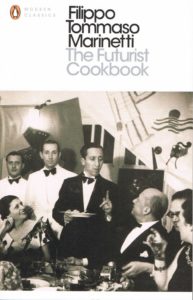 What? A cookbook in the first; a violent, avant-garde, super-nationalist manifesto of total social overhaul in the second.

When? 1932, during the second wave of Italian Futurism.

Why? Why indeed read Marinetti at all? His work, going back to the first Futurist manifesto of 1909, is scarred with an obsessive love of technology and speed, nationalist tendencies, misogyny, xenophobia and violent revolutionary motifs. At the same time, he is a master of the evocative and energetic, the ultra-progressive, the ecstasy of a sentence overflowing with passionate imagery. These are two sides of the same coin. Marinetti is evocative because he is overly-evangelical; energised by his Fascism; unabatingly forward-thinking (if misguided); a mind which has tied art and life so inextricably that there is no difference between the abolition of old artistic ideals and the physical destruction of a political enemy. His ideas are hyper-extensions of his palette; in his work is contained the moral, the amoral, the immoral and, in the Cookbook, dates stuffed with anchovies wrapped in ham and served with ice-cream. It should be read as nonsense, like most Fascist literature, but, regardless, with joy. Do not attempt to cook the food though. It sounds disgusting.

The Futurist Cookbook is available as a Penguin Modern Classics paperback, in translation by Suzanne Brill, with an afterword by Leslie Chamberlain.