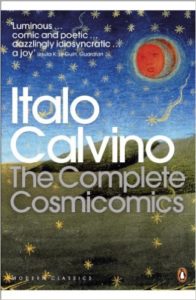 What? An anthology of his 30-odd odd science fiction shorts, following an omnipresent narrator (‘Qfwfq’) through the various manifestations of his eternal being: a sea-snail, a molecule, a dinosaur, etc.

How? Moving slowly through unconnected histories, each indicative of Calvino’s far-reaching, pseudo-scientific Cosmicomic voice, blending in and out of focus.

Why? I picked up the Cosmicomics in a bookshop in Verona; I literally picked it up and was about to walk out of the door without paying, but bottled it. This was fortunate; I am not built for shoplifting. The stories within encapsulate this story, as well as all the other insignificant stories of the universe as it played out now and will play out in the future. Time here is non-linear and of little importance. Of more importance is the reflection of human experience Calvino lays over every neutron and proton; the Cosmicomics show us at once our complete insignificance, whilst placing us, invisibly, at the centre. The Cosmicomics are ambitious, falling just short of the truly funny, but much more readable than Calvino’s meta-work.

The Complete Cosmicomics is available as a Penguin Modern Classics paperback.