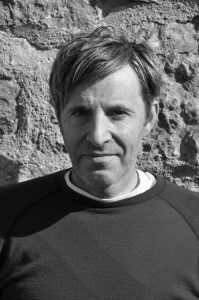 As part of my interview series Writers on Research, I spoke to author Tristan Hughes on the research process behind his collection Shattercone (Parthian Books, 2020).

For me, one of the most evocative aspects of the stories that make up Shattercone is their proximity with the natural world. The level of detail in particular draws many of these stories right up to the line between short fiction and nature writing. I wondered if you could elucidate how you approach collecting and then incorporating natural detail into your fiction. Is there a process by which your experiences of the natural world are translated into setting or narrative, or is the environment more a source of abstract inspiration? How does your use of nature-oriented vocabulary, which permeates the collection, feed into that?

I think for me it’s more a kind of hands-on approach rather than a case of abstract inspiration.  The landscapes I know most intimately (and write about), I’ve often tended to experience with my hands very much in dirt, so to speak.  My father is a farmer, and I grew up on a farm in north Wales, so whenever I write about that landscape I’m seeing it partially through that lens.  So, for example, I’d better know what Ragwort is, and looks like, because it’s bad for cows to eat it.  The same is true for northern Ontario, where many of my friends and family live and work very directly with the land – as biologists, as park wardens, as outfitters – and who like to fish and camp and canoe (as I do).  So I think in terms of collecting natural detail it happens in two related ways for me:  getting to know the names and uses of things because you’re involved in activities that require knowing them, and picking up that knowledge and vocabulary because the people around you are using it.  It boils down to a case of simply having spent a lot of time in those landscapes, and spent it with people who know much, much more about them than me, and in different ways and from different perspectives.  And the most important thing is making sure I listen.

We’ll circle back to that idea of listening shortly, but just to continue on that theme of setting for the moment, I wanted to ask how your personal relationships with the recurrent locales in Shattercone and your wider work have affected your prose. In particular I’m curious as to whether you feel a creative distinction within yourself splitting your responses to Canada and Wales, your birthplace and your home. Do you feel that these two disparate locales split you creatively, draw you in different directions, bleed into your work in divergent ways?

I’d probably describe it more in terms of bifurcation rather than splitting.  Because I’ve moved back and forth between those two places for as long as I remember (and still do), I’ve always tended to see one through the lens of the other, with a kind of double-vision.

This was definitely something I wanted to bring out in Shattercone.  I tried to embody the exploration of lives that were entangled and subtly linked across different geographies in the structure of the collection, through the use of twinned stories.  But also through the wider points of connection and overlap between the stories – threads that are not always resolved or tied up, but intersect for a moment in different places and times.  In many ways, the collection was an attempt to stitch together any split, to bring those landscapes together, to see double.  There’s a great line from the Welsh poet, David Jones, where he says that one of the difficulties (and conditions) of art is that sometimes we’re ‘trying to make a shape out of the very things of which one is oneself made.’   And in some senses the shape of the collection reflects, and is made out of, the two places that formed me.

Underneath the natural description and the complex characterisation within Shattercone, there is also a wealth of human history. Your epigraph explains the meaning of ‘shattercone’ as a fragment of rock ‘formed by violent shock-waves’, and for me this seems like a succinct metaphor for the influence of history within the stories. Would you be happy to describe how historical research fits into the process of your narrative designs? Do you consider your stories to be ‘shattercones’, ricocheting from your historical research, or do they have a less consequential relationship with their social context?

I’ve long been influenced by Faulkner’s sense of the past as something perpetually echoing through the present, pulling it into strange, unexpected, and often tragic, shapes.  And I remember being struck, on a visit to see a shattercone in Canada, by how what I was looking at was essentially a landscape of aftermath – that imprinted into what looked like a cliff fringed with trees was this long echo, these petrified shock-waves.  It felt like a perfect metaphor for what I was trying to do with the stories.

A lot of my fiction has grown out of that collision or overlap of landscape and history – the realisation that what appears given and natural turns out to have been indelibly shaped by the social and historical.  I remember how much I loved discovering ruins in remote or hidden places as a child (an old trappers shack in the woods, a derelict farm house in some distant field), and thinking ‘What happened here?’  Usually someone in my family would have a story about them, just as they seemed to for most of the features of the places we lived, and that was my first historical research (as well as probably the most important inspiration for me as a writer).  And in a way not much has changed.  Of course, I tend to supplement those stories these days with books and articles, but the process and template is exactly the same: some incongruous detail, some relic or ruin encountered where you didn’t expect, will start begging questions and pulling on my sleeve.  And that process is often replicated in the narrative structure of the stories themselves.  An echo or shock wave from the past rears up and – whether it be tragic or affirming, a fork in the road or a loop to get stuck in – can’t be ignored.  A lot of the narrative design of the stories revolves around these moments of emergence and recognition.

That’s where the question of setting, landscape and history all overlap.  Geography is never fixed for a writer: every new character, every emotional or imaginative need, every new shard of history, every new narrative, shifts the ground, so to speak.  It leaves you a bit like a medieval map-maker – you have to include the floating islands (and the dragons and the serpents too), because they’re as real as the continents.

That image of you moving through the local landscape and picking up stories from your family really strikes me. To return to what you touched on earlier, in my recent interview with author Alexandros Plasatis, we spoke in detail about the role of the author-as-listener, particular in relation to creating effective dialogue. Specifically, Alexandros spoke about the practice of listening to people ‘as a human, not as a novelist’, even if our interactions still constitute what I describe in this series as ‘research’. Does this ring true for you?

I love that quote from Alexandros – that’s exactly how I’d see it.  As I mentioned above, when I’m listening properly it’s usually not directed or telic.  I almost never think, ‘This is something I’m going to use in a story’ or ‘This is something I’m researching.’  But often fragments of speech will stay with me, ways of describing things, pieces of information and insight, and later – often unexpectedly – they’ll pop up.  The original speech is almost never copied exactly or transcribed – I’m a terrible notebook keeper – but those bits and pieces of language, a phrase here and there, a rhythm in the way people speak, a way of looking, those feel as much a part of the landscape to me as the trees and lakes and so I like to put them into the stories.

Finally I’d like to ask a straightforward question on the nature of research in general, something I’ve asked many of my interviewees but which continues to give a hugely wide range of responses. Speaking as both a Creative Writing practitioner and as an educator, do you feel that your writing constitutes an act of research in and of itself? Is there an extent to which Shattercone is itself a thesis, an exploration of a central question that can only investigated through fictional experimentation? Does fiction, and short fiction specifically, hold that methodological capacity?

I have a good reminder of this question every year, and I’m not sure I’ve ever really resolved it.  Our Creative Writing students do a project in their final year (essentially a longer piece of creative work), and as part of the project they have to write a proposal outlining what they plan to explore and write, including three or four research questions.  Usually there comes a point near the end of the project, as they’re writing their critical reflection on what they’ve done, when one of them will ask, ‘Do I have to have answered my research questions?’  And I’ll try to explain (to myself as much as them) that although we call these questions, we never actually answer them, not in any straightforward sense.  I end up in all sorts of tangles with these explanations, usually descending into increasingly gnomic, Yodaesque utterances, like ‘Well, one way to look at it is that the answer to the question is the artifact you made to explore it’, or ‘The question is the answer, or maybe the answer is the question’, or ‘The writing is trying to figure what exactly it is you’re asking’, or ‘The methodology is the result.’

Perhaps one of the difficulties here is that when translating the creative process into the language of the academy – like research questions and methodologies – the terminology tends to domesticate and defang that process a bit, taking some of the wild, unruly, contingent, chancy, slightly berserk, nature out of it.

What I could say is something like, ‘Writers tend to have a handful of particular preoccupations, obsessions, hauntings, peas-beneath-the-mattress, cosmic naggings, and every new story they write is a fumbling after them, the scratching of a persistent and perpetual itch.  And what’s meant here by methodology is any-which-way-we-can, or as Faulkner memorably put it, ‘trying to knock together a chicken coop in the middle of a hurricane’.  Now I’m not sure I’d be able to include that in a module guide, or a research grant application, but for me it often feels pretty close to the truth.

Tristan Hughes was born in Atikokan in northern Ontario and brought up on the Welsh island of Ynys Mon. He is the author of four novels, Send My Cold Bones Home, Revenant, Eye Lake and Hummingbird, as well as two collections of linked short stories, The Tower and Shattercone. He is a winner of the Rhys Davies Short Story Award, an O Henry Award, the Edward Stanford Award for Fiction with a Sense of Place, and the Wales Book of the Year People’s Choice Award. He is currently a reader in Creative Writing at Cardiff University.