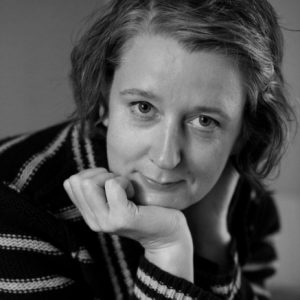 As part of my interview series Writers on Research, I spoke to author Claire Fuller on the research process behind her novel Unsettled Ground (Fig Tree, 2021).

You’ve spoken elsewhere about how Unsettled Ground was initially inspired by your coming across an abandoned caravan in the woods. This was fascinating for me because in finding out the origin point of the story my view of its design completely changed, almost as if it had been given a new centre of gravity. I’m curious to know whether this progression from a specific image to wider themes and narratives is typical of your process. Did you see the caravan as your centre of gravity, and do you think having such a thing helpful or even necessary when planning a novel?

That’s really interesting – I hadn’t thought of it as a ‘centre of gravity’, where supposedly everything is in balance or springs from. The section where Jeanie and Julius are in the caravan does feel very central so that it’s possible to trace lines from it into the past and into the future. Really though it was simple a point to aim for when writing Unsettled Ground. I might start out from a sandy beach, knowing there’s a massive body of water I have to cross in order to finish a novel. The caravan was a small buoy I could aim for and then launch off from. Most of my other novels have started with a character in a place in a similar way, but for the others that place and character has come much earlier in the narrative. For some reason in Unsettled Ground, I didn’t want to start with the caravan, but instead, I was interested in exploring what circumstances would have led someone to live in a place like that.

Other than a point-of-destination for your narration, I also feel like the abandoned caravan stands succinctly for something many of us have experienced at one time or another – the often less-than-idyllic realities of rural England. In the first half especially, Unsettled Ground broadly presents village life as a scruffy, claustrophobic and hostile place, drawing a social environment more akin to Hardy than Herriot. Do you think that’s fair to say? And if it is, how might that align with or challenge your own experiences of life in Wiltshire and elsewhere?

I did live with my family in a caravan for six months when I was six, although it wasn’t for reasons of poverty, and my memories of the cold and the damp, the lack of an inside toilet or bathroom, and the smell of the place are still incredibly vivid. But I can’t say that any of what Jeanie goes through is my lived experience. I grew up in Oxfordshire and live in Hampshire, so even the fact of her and her brother living in Wiltshire is invented. However, I certainly agree that village life in Unsettled Ground is anything but cosy – definitely more Hardy than Herriot. I spent my first ten years in a village and most of my childhood memories from that time are very positive and more to do with the landscape than the people. I wasn’t aware of the detail of what was going on in the village in terms of class, outsiders and gossip, but I do remember all these things in a general way which I’m sure helped with writing Unsettled Ground.

I feel like there’s a fair dollop of Hardy in Unsettled Ground, so it wasn’t too surprising to learn that you visited his cottage in Dorset as part of your research. Comparisons have also been made between your writing and that of Daphne du Maurier’s, not just because of your comparative themes but perhaps because of the driven, forward-moving structures of your novels. I wonder if du Maurier had an influence on Unsettled Ground, and if so what comparisons do you think are fair to draw in that dark, driven style and structure? Is there something of the Gothic (as I explored recently with Elizabeth Brooks and Jenn Ashworth) in your writing?

The comparison with du Maurier (which I’m very flattered by) is usually made between her novel, Rebecca, and my third novel Bitter Orange – which is set in a large English country house, and definitely has very gothic themes. I wouldn’t say that du Maurier’s writing had any influence on Unsettled Ground, but Bitter Orange eventually became a gothic novel, with supernatural elements, themes of sexual obsession, excess, and voyeurism. But in the way that the Gothic always deals with dark subjects, my novels do too – Unsettled Ground included. I don’t think I could ever write an upbeat, happy book!

A true Hardy-ite, then… That said, something that stood out for me, one of the real chinks of light through the novel (and the only persistent intertextual reference from the epigraph onwards) was your use of folk music. The bond provided to Jeanie and Julius through the music is extremely heartfelt, and I wonder if that comes from a specific place within you. I know for example that your son Henry Ayling performs folk music, and I’m curious to know whether music has bonded you two in a similar way. What is it about folk music, do you think, that speaks to the heart of so many people?

Oh, this is such a big subject! Folk music, country music, Americana – all these styles I love to listen to. And music often finds a way to wriggle itself into what I write. When I was writing Unsettled Ground, Henry was still living at home. His bedroom is next to my writing room, and he would often interrupt me to play me something he’d written and discuss lyrics with me. When he was younger I introduced him to many albums and musicians, and I’m delighted that now he’s introducing me to music he’s discovered. Perhaps folk music speaks to the heart because there is often a narrative in the lyrics, and most usually stories of love and relationships gone wrong. And there is often longing and melancholy – something that tugs at our emotions.

Well, in that sense I definitely see a link between that and the general tone of your novels. I’d like to close by asking about research in general. You’ve mentioned elsewhere that you don’t do any research before starting a novel, which is a process a few of my interviewees have also described. And I know that the research you undertook once Unsettled Ground was in progress consisted of more than just reading, including taking a finite amount of money to the supermarket to attempt to understand Jeanie’s situation. I wonder if you could tell me broadly what research means to you, where it fits into your process and whether your attitude to it has changed over the years?

I enjoy doing research for my novels, so much that I try to limit myself. It is very easy to spend a day researching some arcane point only to find that it gets deleted later. However, sometimes digging deep into a particular area that I know nothing about will also sometimes give me something to move the plot along or change a character. Because I don’t do any planning before I start writing, I can only research as I go along. When I come across something I need more information on I’ll do my research then. That might be the Internet generally, asking a question on Twitter or tracking down an expert to interview. Although at the same time as I’m writing I’ll also try and find novels that cover a similar subject to see how writers have done it before me. Interestingly, with Unsettled Ground I couldn’t find any novels that dealt with rural poverty in contemporary England. I don’t think my attitude has changed over the years – only that I am perhaps now firmer with myself to not stay down the research rabbit hole for too long!

Claire Fuller is a novelist and short fiction writer. For her first degree she studied sculpture at Winchester School of Art. She began writing fiction at the age of 40, after many years working as a co-director of a marketing agency. She has a Masters (distinction) in Creative and Critical Writing from The University of Winchester.

Her four novels: Unsettled Ground (currently shortlisted for the 2021 Women’s Prize for Fiction), the critically acclaimed Bitter Orange (longlisted for the International Dublin Literary Award), Swimming Lessons (shortlisted for the Encore Prize for second novels, and Livre de Poche Prize in France), and Our Endless Numbered Days (winner of the 2015 Desmond Elliott Prize for debut fiction), have all been published by Fig Tree / Penguin (UK), Tin House (US), and House of Anansi (Canada). They have been translated into more than 18 languages.

Claire lives in Winchester, England with her husband and a cat called Alan, and has two grown-up children.