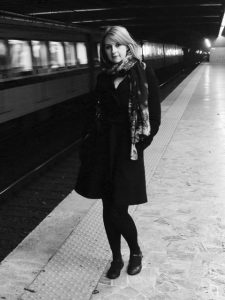 As part of my interview series Writers on Research, I spoke to author Helen Cullen on the research process behind her novel The Truth Must Dazzle Gradually (Penguin, 2020).

You’ve spoken elsewhere about how The Truth Must Dazzle Gradually originated from your ideas around the ‘stoic Irish father’ archetype. For me that goes hand-in-hand with one of the other core themes of the novel, that of ‘perfect motherhood’ and its associated psychological pressures. I wondered how your ideas around fatherhood and motherhood fed into the novel as you wrote. Did you speak with or read about parents and their experiences? Did you draw on things you’ve seen and felt first-hand?

Even with works of fiction it is inevitable that an author will draw upon their experiences in the world to inform their work, at least to some degree, but I don’t see my novels as a platform through which I should air ideas I may want to communicate – for me that is the work of non-fiction and journalism. Nonetheless, of course, my representations of motherhood and fatherhood were inspired by what I have witnessed, experienced and encountered – even if all of those different impressions formed are fused together in unrecognisable ways in the fiction from the source materials. I am really interested in the iconisation of the mother in Irish society and so that definitely shaped the lens through which I looked at the mothers I was writing into being. I’m not sure how a writer could attempt to capture Irish society in their work and not interrogate the cultural meaning of the Irish Mammy to some degree, and yet, Irish mothers as protagonists, as subjects with agency and autonomy rather than a symbolic role, have historically been so absent from our literature. I really wanted Maeve in The Truth to be a complex woman for whom her motherhood was just one part of her identity.

Naturally the archetypes of the ‘stoic Irish father’ and the ‘perfect mother’ are tied throughout the novel to ideas of ‘Irishness’ and Irish family culture. As an Irish writer now living in the UK, I’m curious to know if your view of Ireland changed at all as you wrote The Truth Must Dazzle Gradually. Irish history and culture is signposted throughout the temporal structure of the novel, culminating of course in the Marriage Equality Act of 2015, and I feel those cultural allusions give us a sense of mixed feelings, a landscape of contradictions. How do you feel about that?

I don’t plan my novels in advance but rather just follow a narrative thread with the story unravelling as I write, so I didn’t know at the outset what major moments in Irish society would end up featuring in the timeline. Having said that I was burning to write about Ireland and bear witness to the societal changes we’ve experienced in recent years through the lens of one family. As an Irish woman I feel that for a long time I loved my country, but it didn’t really love me back. I have LGBT friends who felt the same, but by the time I finished writing The Truth, I definitely felt like I was in healthier relationship with my homeland.

Staying with ideas of Ireland for the moment, I feel like there are two contrasting environments in The Truth Must Dazzle Gradually – the urban spheres of Dublin and other cities, and the remoteness of Inis Óg. I think its implicit in the characterisation of the islanders why Inis Óg had to be a fiction, but I hoped you could tell us more about how you handled that very real contrast between urban and rural. Did you find, when researching for the novel, that there is a tension between urban Ireland and the Aran Islands? If so, how did you harness and explore that tension?

The fictional island of Inis Óg was hugely inspired by Inis Oírr, the smallest of the Aran Islands, which is a very special place to me. When I first visualised the opening scene of the novel, I just immediately knew that the family lived on an island, but I didn’t want the anxiety of trying to recreate Inis Oírr from my unreliable memory. I felt that would stall the writing and so I gave myself the freedom of creating an alternative setting where my imagination could roam freely. Placing a novel on an island is a great gift a writer can give themselves because of the inherent metaphorical power that exists. I felt it offered another dimension to the questions of othering that are raised in the novel, and how many people feel disconnected from the mainstream/mainland. The Dublin/London/Galway urban scenes offered a different texture, a contrasting space, where we could see the characters interact with those other environments in what are hopefully illuminating ways. I’m really interested in how our physical environments informs our sense of personal place and I think we see this particularly starkly with Maeve – but also in how the children’s relationship with the island changes over time. If there is a tension I harnessed to do with location, it is more the tension that comes with having a complicated relationship with the idea of home.

Whilst there are several allusions to creative activity throughout the novel, I was drawn to Murtagh’s description of pottery’s ‘capacity to allow the obsessions of the interior world become manifest’. I wonder to what extent you feel that capacity in literature, when the act of writing is so much more obviously linked to conscious design. I know part of your process is not to write to a strict blueprint, but did you feel, as you wrote, that you found your interior world becoming manifest?

I think it’s less my personal interior world becoming manifest but rather the workings of the imagination becoming so.

It was the character of Maeve that led me to Keats – a huge part of the process of developing characters for me is discovering what art they look to in order to help them understand their world and to articulate their experiences – what music they love, what literature they read, what philosophers stir something for them. It just became clear to me as I understood Maeve better that Keats would be one of the voices that would resonate with her in a meaningful way. I understand, of course, that the resonance must originate with me first but so much of what we do is just following instincts that later are harder to retrospectively deconstruct. It feels to me that Maeve led me to Keats, even though I know it must be the other way around!

Aside from Keats, the novel is filled with intertextual references to both to literature and to pop culture in general. Actually, I feel as though the intertextual references ground us to the wider movements of Irish and international culture as the characters develop within their emotional worlds. To close, I’d like to ask as plainly as possible – does Christy Moore know he has a fictional donkey named after him?

Ha! I doubt it but if he does, I hope he takes it as a compliment!

Helen Cullen is an Irish writer living in London. Her debut novel The Lost Letters of William Woolf was published by Penguin in July 2018 in the UK, Ireland, Australia and South Africa and published in America by Harper Collins in June 2019. The novel is also available in translation in numerous foreign markets including Italy, Germany, Russia, Greece and Israel where it hit the bestseller charts. The Lost Letters of William Woolf has also been optioned for television by Mainstreet Pictures. The novel also garnered Helen a Best Newcomer nomination in the An Post Irish Book Awards 2018. Her second novel The Truth Must Dazzle Gradually was published in Ireland and the UK and as The Dazzling Truth in the USA and Canada in August 2020. You can find Helen on Twitter, instagram and Facebook as @wordsofhelen