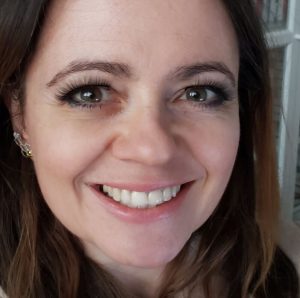 As part of my interview series Writers on Research, I spoke to author Carys Bray on the research process behind her novel When the Lights Go Out (Hutchinson, 2020).

One of the most challenging questions that When the Lights Go Out raises is how we deal with that debilitating feeling of helplessness that so many of us suffer from when thinking about climate change. I know you’ve spoken elsewhere about Nobel laureate Paul Romer’s idea of ‘conditional optimism’ – in your words: ‘hope should shove you out the door’ – and I’m curious as to how this idea fed into your designs for the novel. I wondered specifically if you felt that sense of practical optimism driving your work, and whether you feel that optimism might be a necessary aspect of the creative response to both climate change and climate anxiety.

I wrote the novel in the aftermath of my brother’s death. It was the saddest period of my life, and I struggled to do a lot of basic, everyday things. Instead of writing, I spent many hours procrastinating because I did not want to be alone with my thoughts. I discovered that the abject pessimism I felt lessened somewhat when I was physically occupied. So, I stripped wallpaper, painted fences, embarked on a garden clearance, dug up turf etc. until I was finally able to sit quietly again. Perhaps the writing that followed was driven by a sense of practical optimism, or at least, a sense that optimism (or hope) might be salvaged.

I wanted When the Lights Go Out to have a hopeful ending, but at first I wasn’t sure how to manage it. Traditional story structure(s) – ideas about the hero’s journey/the triumph of good over evil/the idea of ‘progress’ – aren’t necessarily useful when it comes to writing about climate, and I was aware that a neat, overly optimistic ending would be a betrayal of the novel and its ideas. I like Rebecca Solnit’s description of hope: ‘Hope is not a lottery ticket you can sit on the sofa and clutch, feeling lucky. It is an axe you break down doors with in an emergency.’ In the novel, hope is found in doing, which brings me back to Romer’s conditional optimism. Conditional optimism is not tantamount to cheerfulness or positive thinking; it’s all about action.

I think that’s an important distinction, especially in terms of how we position ourselves in relation to the weight of (sometimes apocalyptic-sounding) climate science. Actually, I’m curious to know whether your reading in terms of climate science contributed to the narrative design of the novel. Did you find that as you came across facts/figures that your attitude towards the world of When the Lights Go Out began to change? Or towards your characters, particularly James who acts as a conduit for many of these insights?

While I was working on When the Lights Go Out, I read a lot of climate-related news, but I don’t think my reading had much impact on the novel’s structure. Chris uses bad news like ammunition, as a way of injuring and/or berating his family, while James, who reads his teacher’s copies of New Scientist, uses the things he’s learned to counter some of his dad’s pronouncements – there’s only so much sad news you can listen to as you eat your tea each night!

I enjoyed writing James’s sections. James is more cerebral than his older brother, Dylan, and he’s beginning to think about the difference between the future he’s been promised and the future he can expect. I think a lot of young people are finding themselves in that position (especially in our post-covid world).

For me, one of the most interesting aspects of When the Lights Go Out is, as you alluded to, how our understanding of climate change influences the family dynamic. As part of this, I wanted to ask how you approached the process of keeping Emma and Chris’ relationship at the centre of the narrative design, without it being overshadowed by the hugely-pressing and often deafeningly-loud social and environmental issues that surround it. How did you approach balancing the personal and the public, the domestic and the political? I’m especially curious as to what canonical or contemporary texts, if any, you turned to when thinking about that balance.

I think there’s a great deal of overlap between the personal, domestic and political. When I started writing When the Lights Go Out, I wanted to depict a marriage that comes under pressure from something external (and perhaps existential), making it difficult to address/resolve. While I was writing the novel, a few friends mentioned that their partners had voted differently from them in the Brexit referendum and the subsequent general election(s). These differences of opinion either caused or uncovered cracks in relationships that had once been strong. I remember enjoying Jonathan Coe’s novel Middle England and seeing something similar play out in its fictional world.

I don’t think I read any novels with the intention of examining the relationship(s) between the social/environmental and personal/political as I wrote When the Lights Go Out. Having said that, I read a lot of climate-related fiction and, as I think about your question, I can see how the social/environmental intersected with the domestic/political in those novels. I especially enjoyed The Overstory by Richard Powers, Megan Hunter’s The End We Start From, The Death of Grass by John Christopher, Flight Behaviour and Unsheltered by Barbara Kingsolver, The Last Children of Tokyo by Yoko Tawada, Octavia E. Butler’s Parable of the Sower, Jeff Vandermeer’s deliciously weird Annihilation and Bourne and Liz Jensen’s dark ecological thrillers The Rapture and The Uninvited.

Just briefly I wanted to touch on another core theme at the heart of When the Lights Go Out, that of religion. Like yourself, I was also taught to believe that the Second Coming could happen at any moment, and just as with Chris’ family background in the novel, a lot of that ‘rhetoric of disaster’ (as you’ve described it elsewhere) came directly from the Bible. I wondered if you could share your experience of using the Bible as a research tool for When the Lights Go Out, especially as a text you have such a personal history with. What did you find when you re-examined certain passages with the novel in mind? Has writing the novel altered your relationship to the text?

I don’t believe in God anymore, but I do have a great fondness for the Biblical stories I heard frequently during my childhood – in fact, I gave Chris a religious background purely so I could use some of those stories in the novel. I particularly enjoy the stories in which people behave badly. Jonah is a favourite – he runs away, tells lies, almost drowns and having been miraculously spared, he sulks!

I don’t think writing the novel has changed my relationship to the text, but as I was thinking about which passages to include, I began to wonder whether some Biblical stories might be repurposed in light of our present difficulties. For example, the story of The Good Samaritan asks, ‘who is my neighbour?’ and Biblical listeners are invited to widen their idea of the category. Perhaps a modern retelling might widen the category further – our neighbours are not only humans, they’re bees, earwigs and hoverflies, how might we demonstrate neighbourliness to them?

I like that idea that novels might ask questions, even ancient questions like how might we demonstrate neighbourliness, through the creative process of narrative design. Do you think, or did you feel when writing, that there is a specific question at the heart of When the Lights Go Out? Do you see the novel as a question, as an act of research into the repercussions of climax anxiety on family life for example, or is there something different at the heart of it?

I suppose, technically, the novel is an act of research, though I don’t really think of it like that. I see it as a collection of things I’ve been thinking and worrying about (and, hopefully, some good jokes), and I suspect there are plenty of people who’ve also been thinking and worrying about similar things and who may perhaps enjoy the novel (and *fingers crossed* laugh at the jokes).

For me, the question at the heart of When the Lights Go Out is: If you believe your world is going to end, how should you live? Chris is thinking about that question in relation to climate change, but it’s a much older question. Ultimately, the world will end for each of us and in the meantime, how should we live?

Carys Bray’s debut collection Sweet Home won the Scott prize and selected stories were broadcast on BBC Radio Four Extra. Her first novel A Song for Issy Bradley was serialised on BBC Radio Four’s Book at Bedtime and was shortlisted for several awards including the Costa Book Awards and the Desmond Elliott Prize. It won the Utah Book Award and the Authors’ Club Best First Novel Award and was selected for the 2015 Richard and Judy Summer Book Club. Her second novel The Museum of You was published in 2016 and her third novel When the Lights Go Out was published in 2020.

Carys has a BA in Literature from The Open University and an MA and PhD in Creative Writing from Edge Hill University.