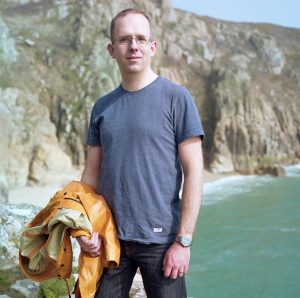 As part of my interview series Writers on Research, I spoke to author Wyl Menmuir on the research process behind his novel Fox Fires (Salt, 2021).

Fox Fires is set in the labyrinthine city of O, a place as tricky to navigate as anything from Kafka, Borges or Ismail Kadare. Topographically it resembles many different cities (Prague, Odessa, Minsk, even Madrid), but I feel the real sense of evasiveness that permeates O comes from its feeling of suspended existence, its almost timeless lack of identity, fuelled by the repression which sustains it. I hoped you could tell me about some of the geographical research you undertook to help imagine the city of O. Whilst researching, did you come across topographical or architectural features, in Central Europe or elsewhere, that made you stop and say yes, that’s O, that’s the feeling?

I knew I wanted to create a large canvas in which the action could take place. In my first novel, The Many, the action takes place in a tiny fishing village and in the waters just off its coastline, a tightly defined crucible. It’s a claustrophobic place to spend any amount of time and I spent three years there, developing my characters and working out what the story was and when I came out of that I wanted to work on a novel which felt maximal, expansive.

In a strange way, Fox Fires is the other side of the coin to The Many. Where the first novel is inward-looking, the second looks out, towards Europe. I began to write Fox Fires around the time of the EU referendum when my own relationship with Europe was very much on my mind. I hadn’t really realised this until just now, but in their own way, both novels are concerned with isolationism and concepts of home, though they look at those concepts from different angles.

One of the challenges of this novel was to write convincingly about a city that doesn’t exist and has never existed and I spent a lot of time in my own head, wandering the streets of cities across Europe in which I have spent time or passed through, places that have stayed with me. If it comes across as a partially remembered city, a city of memory, that’s because it is. I stole features and buildings from different cities and started to conceive of districts with their own distinct feel and I couldn’t really say which came first, the features or the city. I wasn’t able to travel much while I was writing Fox Fires, so I used maps and Google Street View and it was as I was wandering the streets of cities I have only dreamt of visiting that the story started to come together.

While, on the surface, The Many and Fox Fires don’t seem to share a lot of ground, O is very much a hybrid city, much like the village in The Many, which was a place that I put together based on fishing villages across Cornwall, the west coast of Ireland, the east coast of Scotland.

In Fox Fires, I wanted to explore a city that was on the cusp of something – a new way of being, perhaps – a place trying to move forward while simultaneously trying to come to terms with its past, somewhere that is in denial in some way about its recent past. I remember wandering around various cities in Central Europe in particular around the turn of the millennium and really getting that feeling.

I’m intrigued that you point to turn-of-the-century Central Europe as a particular influence, especially echoing the Central European style that we’ve already alluded to through Kafka and Kadare. Continuing with scene-setting for a moment, I wondered if you could share your ideas on how the history of Soviet and post-Soviet Europe, which seems to pulse implicitly beneath the city, fed into your conception of the political environment.

There are a lot of implicit references to events that took place in the late 90s across parts of Europe, yes, elements of recent history that I borrowed, especially from countries that experienced conflict. One of the things I became fascinated by was the idea of national guilt and reconciliation, which was something I read quite a lot about. I’m interested the stories we tell ourselves in order to justify the things we do, the role of memory in the development of national identity, the role of guilt and the necessity of reconciliation in accepting histories many people would rather forget.

Another thing that feels distinctly Central European, even Kafkan, is the theme of ‘the copy’. Throughout the novel there are allusions to replicas, records, echoes and more generally the transmission of information via carbon copying, whilst your Acknowledgements point explicitly to Kate Eichhorn’s work on political xerography (pre-digital photocopying). I wanted to ask how you approached the idea of the implications of ‘the copy’, and how that might have fed into your process?

While I was writing Fox Fires, I was preoccupied with ideas about copying, degradation and disintegration. One of my soundtracks to the novel was William Basinski’s ‘The Disintegration Loops’ and in my mental wanderings of the city, I could hear the hiss of tape, the disintegrating loop, the creation of something that was only possible in analogue technologies. That echoed the process of creation of the novel itself, which is one of taking a clear idea and turning it, through the editing process, into something rich and strange. That’s one of the reasons the novel had to be set when it was set – on the eve of the mass take-up of digital technologies. What I love about xerography is what starts as a clear, crisp image can become degraded and yet somehow richer in the process of degradation, that in that process a – perhaps subversive – truth is revealed that was not present in the original.

Whilst I’ve asked about the presence of ‘echoes’ in Fox Fires, there is relatively little overtly intertextual material in the novel. The only thread that comes through strongly (outside of music) is the link between the narrator Wren’s experience and Greek mythology, specifically Theseus and the Minotaur. Could you tell me why, in a place like O which is so resistant to history, Greek mythology felt like an important cultural thread for Wren to carry into the environment? Why do you think mythological frameworks remain so useful to contemporary novelists?

That’s quite a practical thing, I think – intertextuality is often about giving the reader a sense of stability in the narrative, something to hold onto when everything else seems to be new or in flux. I think that’s what mythological frameworks are often useful for. Aside from biologically, Wren is not of O. She arrives in the city with a whole load of cultural baggage and she brings this framework to bear on the city. It’s a point of reference for her, and for the reader too, a foothold of sorts. And in terms of the story itself, the story of Theseus and the Minotaur has so many of the elements of the story I wanted to tell – guilt and shame, the desire to get to the heart of the matter, a complicated family, a labyrinth at the heart of which is an uncomfortable truth, so while O has its own mythologies, its own folk tales, to which I refer in the novel, it seemed to make sense to use a framework the reader would already know to give them that foothold, a point of reference that might unlock other elements of the narrative.

I find that image of the narrative as a labyrinth (with intertextuality as one possible ‘thread’) a very apt one in terms of some of my recent conversations. To extend that metaphor a little, I’d like to ask (as I’ve asked many of my interviewees), if there is a research question hidden at the centre of Fox Fires, a narrative-labyrinth in which so many of the characters’ motivations are obscured. More generally perhaps, is Wren’s story part of a process of enquiring, or answering, or both?

In the case of this novel – for me at least – enquiry is the point. Fox Fires is a novel about recognising that urge to scratch at the surface of things and see what lies underneath, to get to the heart of the matter through a process of enquiry, regardless of whether it’s going to be painful or dangerous, regardless of whether others might want you to leave the past alone or to hold onto an illusory past. I think that illusory past – the one we’re all tempted by on some level – is dangerous as it means we are unable to learn from what really happened.  I wanted to create, in Wren, someone who was capable of seeing beyond the map to the territory beneath.

Wyl Menmuir is a novelist, editor and literary consultant based in Cornwall. He is the author of the Man-Booker nominated novel and Observer Best Fiction of the year pick The Many, and Fox Fires. His short fiction has appeared in Best British Short Stories and he has been published by Nightjar Press, Kneehigh Theatre and the National Trust. He has written for Radio 4’s Open Book, The Guardian and The Observer, and is a regular contributor to the journal Elementum. Born in Stockport in 1979, Wyl now lives in Cornwall with his wife and two children. He is co-creator of the Cornish writing centre, The Writers’ Block, and works with Arvon Foundation, National Literacy Trust and Centre for Literacy in Primary Education on national literacy programmes, as well as lecturer in creative writing at Falmouth University. When he is not writing or teaching writing, Wyl enjoys messing around in boats.