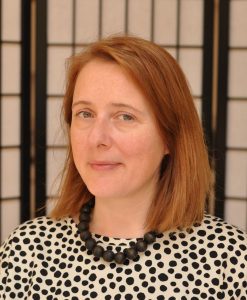 As part of my interview series Writers on Research, I spoke to author Emily Jeremiah on the research process behind her novella Blue Moments (Valley Press, 2020).

I’d like to start by asking broadly about your relationship with Finnish fiction. I know that you’ve translated several Finnish novels, including Aki Ollikainen’s Booker Prize-longlisted White Hunger (Peirene Press, 2016), but I’m curious as to how you feel the tradition feeds into your own work. As someone less conversant with it than you are, I’d love to know where someone interested in exploring Finnish literature might start.

That’s right, I’ve co-translated five novels with my Finnish mother Fleur Jeremiah, as well as poetry by Eeva-Liisa Manner, among others. Translation offers a good training for the writer, because it demands an intense attentiveness to language; you really have to scrutinize what the source text is doing, how it achieves its effects. I’ve learnt from all the works I’ve translated, especially as far as compression and conciseness are concerned; four of the texts I’ve worked on are short novels (published by Peirene Press, which only publishes works under 200 pages). I’d recommend reading all the novels I’ve co-translated (by Selja Ahava, Kristina Carlson, Aki Ollikainen, Asko Sahlberg, and Virve Sammalkorpi), as a way of beginning to engage with Finnish literature – they are all excellent, in my view – but there are many other Finnish writers to explore, of course, for example Sofi Oksanen (trans. Lola Rogers/Owen Witesman) and Antti Tuomainen (trans. David Hackston/Lola Rogers). In terms of the classics, Aleksis Kivi’s Seven Brothers is a highly significant work in the Finnish literary tradition, and then of course there is the Finnish national epic, the Kalevala, which is alluded to in Blue Moments.

Thank you for those recommendations, it’s always stimulating for me to hear about writers from an unfamiliar culture, particularly one with such a rich literary tradition. Continuing on that track for a moment, I found that throughout Blue Moments there is a tension between what I read as ‘Englishness’ and ‘Finnishness’ – though perhaps tension is the wrong word. Eeva is of course a product of both cultures, which complicates her emotional development as she grows up between the two settings. I wondered how you feel about the idea that there is a contrast between ‘Englishness’ and ‘Finnishness’, on a cultural and an emotional level. Do you think there is any immutable essence to either culture, and how might that understanding have informed your designs for Blue Moments?

I wouldn’t say there is an ‘essential’ Britishness or Finnishness – nationality is a construct that changes over time. But when you contrast the cultures, you do see differences. It’s true that for Eeva there is a ‘tension’, or perhaps better, interplay between the two cultures. It’s hard not to lapse into stereotypes when seeking to sum up whole cultures, for example to state that Finns are taciturn and Brits class-obsessed, but we may be able glimpse and capture certain (partial) truths as we write. I wanted to convey the experiential nature of culture and nation – the way these things are intensely personal. So Eeva encounters ‘Finnishness’ in her own unique way, one that is formed by her particular character and family situation. In my work as an academic, I have worked on notions of Germanness, and on ‘nomadism’, a form of subjectivity proposed by philosopher Rosi Braidotti, and I’m sure these investigations played a part in how I thought and wrote about Eeva.

I like that idea of constructs of nationality coming into focus only once placed beside a contrasting culture, as we experience through Eeva in Blue Moments. I’d also tentatively connect that to the repeated motif of masks in the novella, not just regarding nationality as a kind of mask we wear, but as an inherent part of cultural/personal identity. While working in the museum, Eeva comes across the following caption: ‘Masks both conceal and reveal; they hide the impersonator, but reveal the spirit.’ I feel this sheds light on Eeva, her father and others, but I hoped you might expand on how this idea fed into your characterisation. To what extent are your characters defined by the masks they wear, and more broadly, do you feel there is a certain echo of the writer as being both concealed and revealed by the mask of their writing?

The masks in the text are a way to highlight the fact that selves are both concealed and revealed, and the complicated ways in which subjectivity is formed and performed. I was thinking of Eeva’s father, in particular, who is not able to live fully in accordance with what he is. But we all adopt masks in different situations, projecting images of ourselves that vary according to context. I hadn’t thought of that applying to the writer, but yes, it’s an interesting prompt. In writing, we do expose ourselves, but we use established tools to do so, so we are at the same time joining a particular tradition or set of traditions – we merge with others. And the fact of being read points to the relationality involved in the writing process. This also raises the idea of biography – Eeva’s situation is quite different from my own as a child, but my experiences of Finland of course fed into the novella. So the work has autobiographical traits – I am both masked and revealed by it.

Absolutely. And I feel as though that motif of concealment/revelation circles us nicely back to the novella’s title, that idea of the ‘blue moment’ typifying ‘the time between light and dark, when all is in suspense’. Again I feel this speaks to the process of writing and researching, particularly in the sense of the writer as someone who manages the light cast upon their narratives – what to reveal, what to conceal. Does this resonate with you at all? I’m particularly curious to know whether you feel this is an integral part of the writing process, that all literature is to an extent an exercise in the creation of ‘blue moments’.

For me, the blue moment designates the state of being in between, unfixed. It is the condition we find ourselves in all of the time; we all grow and change, and homes are always conditional. Eeva comes to understand and even celebrate that in the course of the novella. I hadn’t thought of the image in literary terms, but it’s an intriguing idea, the writer as ‘someone who manages the light cast upon their narratives’. Again, we’re back to the mask. We also come up against the idea of writing as an intentional process. Writing springs from the unconscious, so that what one ‘chooses’ to include in a narrative may reveal the psyche in quite unintended ways. At the same time, there is a conscious process of selection and control involved, at least partly. So yes, I think you’re right: the blue moment could be said to stand for literariness, that crepuscular phenomenon.

Emily Jeremiah holds an MA in Creative Writing from Goldsmiths, University of London, and was awarded Arts Council funding to work on her first novella, Blue Moments (Valley Press, 2020). A professor at Royal Holloway, University of London, she is the author of three academic books. She is also an award-winning translator of poetry and fiction. She has published two selections of translated poetry, by Eeva-Liisa Manner and Sirkka Turkka, with Waterloo Press. With her Finnish mother Fleur Jeremiah, she has co-translated five novels, one of which, Aki Ollikainen’s White Hunger (Peirene Press), was longlisted for the Man Booker International Prize 2016. Her second novella, An Approach to Black, will be published by Reflex Press in 2021.