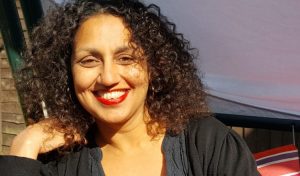 As part of my interview series Writers on Research, I spoke to author Sharon Duggal on the research process behind her novel Should We Fall Behind (Bluemoose Books, 2021).

I’d like to start by asking how you approached researching homelessness, one of the core themes of Should We Fall Behind. It is of course a sensitive subject as well as a prescient one, and I wondered what challenges you encountered when looking into it, both as a researcher and then as a writer, translating what you learnt to the page. Did you find the research taking its toll on you, either emotionally or creatively, as I’ve found researching and writing on the same topic?

When I started out writing this book my intention was to write about home and belonging as a main theme – what home might mean to a disparate set of people who all live in the same area but have arrived there as a result of very different trajectories. It was through reflecting on this that homelessness almost inevitably emerged as a connected thread.

I hadn’t planned it that way and thinking about it now I realise the book is a result of an accumulation of  experiences, my own and those of family, friends and acquaintances, rather than the other way round. So, I didn’t set out expecting or intending to write about a homeless character and start researching from that point – in fact, I think I would have found the whole process quite uncomfortable if I had done it like that. Instead, this myriad of experiences propelled the theme into emerging in the way it did, almost organically, specifically through the character of Jimmy Noone.  For example, I’ve spent some time working as a volunteer in a cold-weather shelter for rough sleepers and in other settings working alongside people who’ve experienced varying forms of homelessness.  Additionally, my time as a writer in residence in a mental health recovery centre led me towards writing  about the precariousness of life – about how any of us could find our lives spiralling out of control as a result of some unexpected but devastating incident. It was by exploring the idea that the course of a life can be altered so drastically without warning that the theme of homelessness became more fully developed.

Fragments of encounters with people I have met, including in the particular situations I describe above, have over time become mingled with other more personal stories around themes of immigration, displacement, leaving a home or a homeland, disconnecting and finding reconnection elsewhere, and somehow these hybrid stories have made it onto the page in the form of fiction.

Just to add, as Should We Fall Behind progressed, the research process also evolved, taking  me down more traditional research routes towards exploring primary and secondary texts in depth. This more formal research was essential, enhancing both my understanding and my creative response to the various threads in the story, including those of what it means to be home or to be homeless. Ultimately, research in terms of this book and this theme was a dynamic process but most definitely helped shape this particular (and other) storylines.

And yes, of course, there were many personal challenges for me in both emotional and creative terms – ultimately though, I hope I have approached the subject sensitively and with respect.

That process of using the ‘myriad of experiences’ around you to develop a multi-faceted approach to your themes reminds me of my recent conversation with Heidi James on how she handled the disparate character designs of The Sound Mirror. Should We Fall Behind delves in intimate detail into the lived experiences of characters from various social backgrounds, as you point out, and I wondered how your research might have fed into this. Did you feel whilst researching different historical contexts that your characters developed in unexpected ways? Did you find your attitudes to them changing as you delved deeper into their past and present choices?

I am not a planner so the whole process of writing a novel is an unexpected journey for me. To some extent I have to be open to being led by the characters as they develop. My work starts with a strong sense of who a character might be. This is followed by an internal interrogation to discover (decide) what it is that motivates them – basically what it is they want. In this way, whole lives begin to form in my head.

With each of  the characters in Should We Fall Behind, I started by wanting to say something about how we are all made up of complex layers built up over time as a consequence of our own actions, but also as a result of things outside of our control – random experiences that can change a course of a life in an instance or, like Rayya and Nikos, historical contexts which can alter the course of whole generations of lives. So yes, as I delved deeper – for example, into Ebele’s experiences of being let down by a series of people close to her or Jimmy’s complicated relationship with his father – their characteristics and their trajectories changed in ways I hadn’t necessarily planned for. To be honest, as this book developed, not one of the main characters (except perhaps Tuli) turned out as I first imagined them.

In terms of developing characters, research was crucial around getting exterior detail right – landscape, dialogue, cultural references, local knowledge, historical context –  as often this is the stuff that lets writers down and leads to characters becoming unbelievable. The other stuff to do with character development – physical descriptors, tone, voice, flaws, strengths etc,  is part of the more creative process rather than the research process given that the work is fiction.

I’m intrigued by that linking of historical context with research and characterisation with the creative process, and where we might find crossovers between the two. Author Alice Ash recently shared a story with me about George Saunders, and how he came to realise that the characters he considered ‘assholes’ were complicated by considerations of their pasts. This reminded me especially of Ebele and Nikos in Should We Fall Behind, and that made me consider whether you feel the central question posed by your novel regards our attitudes to that process of cause-and-effect. If there is a central question, even a research question, behind Should We Fall Behind, how closely would you say it relates to that idea of people being a product of their experiences?

Interesting, and I think I have touched on this in the previous answer,  but I am not sure I would say this was the central question of the book, although I think it is one of the main questions.

For me the book is mostly born from the idea that many of the fundamental experiences that shape us all are the big universal human experiences of love, death, birth, friendship. But, social and historical contexts lead to constructs whereby some stories are more invisible than others, and some lives are deemed less important, less valuable or less interesting as a result. Confronting this falsehood, this imbalance in what kinds of stories get attention, is partially what drives me as a writer.

Yes, I see that, and I think that leads me quite nicely into my final question. There are numerous references to the act of reading throughout Should We Fall Behind, as an act conducive to learning, coping, healing, connecting. In particular, the tradition of Indian literature (seen touchingly through the act of Rayya reading to her husband) seems like something you want to celebrate through your own writing. I’d like to ask what influence the books referenced in Should We Fall Behind had during its composition. To what extent does it enter into dialogue with them, both as a work that is partly about reading and as a novel in its own right?

When you read a lot as writers do (or should do)  books become part of your  subconscious in a similar way to how everyday encounters and conversations do. Over time they become part of your being, inspiring and influencing in ways we don’t realise or expect.

Since publication, a number of people including the writer and academic Preti Taneja have likened Should We Fall Behind to the work of Rohinton Mistry –  this is a totally unexpected but huge compliment as I love his writing and A Fine Balance is a book I rate very highly (which is why it is one of the texts Rayya and Satish read). However, I haven’t read that book for years and I honestly didn’t think about any direct influence it may have on Should We Fall Behind when I was writing it. It is only in retrospect that I see there is in fact a similarity in theme – about life being a balancing act which can very quickly fall off kilter.

More directly, I am very influenced by multi-perspective narratives in both books and film, and particularly like the idea of one event or situation being seen differently depending on the viewpoint.  This was something I wanted to explore in both Should We Fall Behind and in my first novel The Handsworth Times, and I think this stems from a rejection of the concept of a singular story, especially when it comes to particular groups of people.

Reading as an act weaves through the book as you say; it is important to Rayya and Satish but also to Jimmy and Tuli, so no, it wasn’t an intention to celebrate the tradition of Indian literature in particular but rather the act of reading itself. Similarly, there is a thread of music which runs through the book which, like the act of reading, connects to memory and how that impacts on our relationship with the past and with the present. This is something I am very interested in exploring more in my next novel too.

Sharon Duggal grew up in Birmingham as part of a large Indian family. Her debut novel, The Handsworth Times (2016) was The Morning Star’s Fiction Book of the Year 2016 and Brighton City Reads 2017. Her short stories appear in anthologies including The Book of Birmingham and Love Bites: Fiction Inspired by Pete Shelley and Buzzcocks. Her second novel, Should We Fall Behind was published in October 2020 by independent small press Bluemoose Books to wide critical acclaim – it was chosen as a Prima Magazine Book of the Year 2020, selected as one of 6 new titles to be featured on BBC TV book club, Between the Covers, broadcast in May 2021 and shortlisted for the prestigious RSL Encore Award 2021 for best second novel.

Sharon is one half of long-running The Ruben and Sharon Show, the UK’s only regular radio show with a mum and son presenter team, which plays out weekly, live on FM. DAB and online via Brighton’s Radio Reverb. She has an MA from City University and an MPhil for University of Sussex.